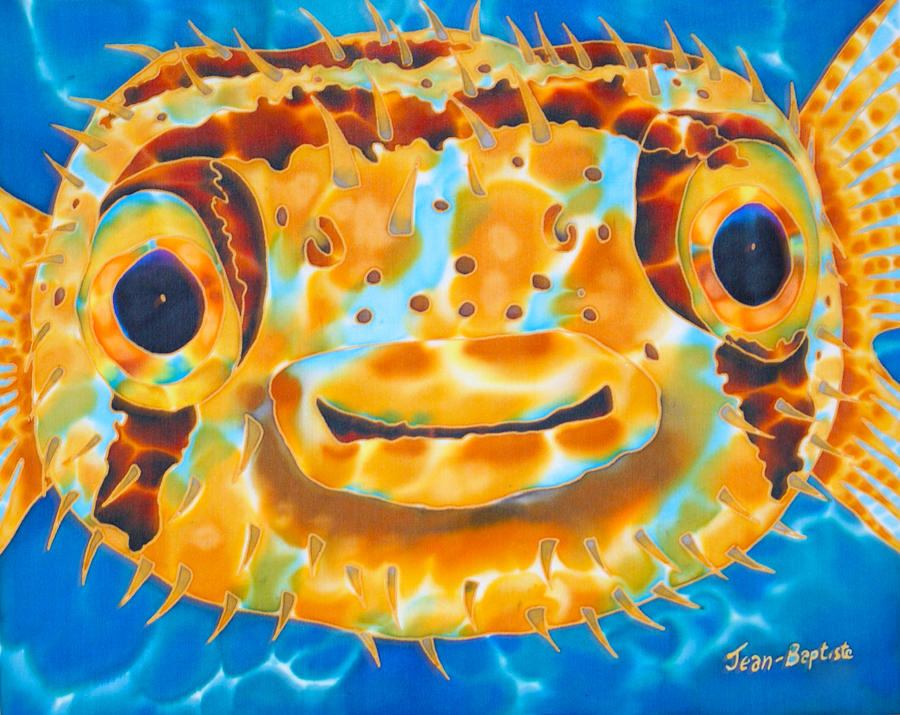 Puffer Fish is a painting by Daniel Jean-Baptiste which was uploaded on June 18th, 2012.

The Tetraodontidae are a family of primarily marine and estuarine fish of the order Tetraodontiformes. The family includes many familiar... more

The Tetraodontidae are a family of primarily marine and estuarine fish of the order Tetraodontiformes. The family includes many familiar species which are variously called pufferfish, puffers, balloonfish, blowfish, blowies, bubblefish, globefish, swellfish, toadfish, toadies, honey toads, sugar toads, and sea squab. They are morphologically similar to the closely related porcupinefish, which have large external spines (unlike the thinner, hidden spines of the Tetraodontidae, which are only visible when the fish has puffed up). The scientific name refers to the four large teeth, fused into an upper and lower plate, which are used for crushing the hard shells of crustaceans and mollusks, their natural prey.
The majority of pufferfish species are toxic and some are among the most poisonous vertebrates in the world. In certain species, the internal organs, such as the liver, and sometimes their skin, contain tetrodotoxin and are highly toxic to most animals when eaten; nevertheless, the meat of some species is considered a delicacy in Japan.
The species Torquigener albomaculosus was called by David Attenborough "the greatest artist of the animal kingdom" due to the males' unique habit of wooing females by creating nests in sand composed of complex geometric designs.

A big thank you to the buyer from Texas.

I would like to thank the buyer from Australia.

A big thank you to the buyer from Homestead, Florida.

I would like to thank the buyer from White Lake, MI, USA.

Thanks Shawn, liked and following your beautiful collection.

I would like to thank the art collector from Prospect for collecting my work.

Thanks Claudia, love your portfolio, L/F.

I would like to thank the collector from Richfield, WI, for purchasing my work and making a home for the puffer.

Thanks for putting them in Daniel! Today is the first time I have been able to see your images since you put them in, they have been white boxes with a little red X in the corner for the past few days. Glad to see the Puffer Fish smiling back at me!