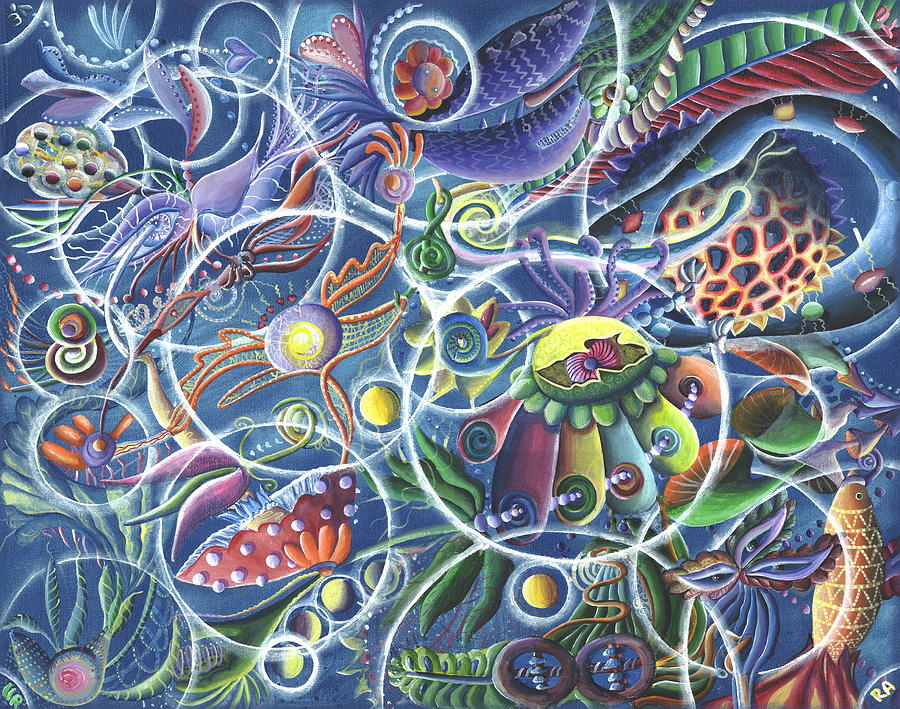 Quantum Entanglement is a painting by Vera Tour which was uploaded on January 27th, 2017.

Look at my fancy bubble world!
Would you dare to be so bold
And try to find in quantum soup
Some thing that makes sense to you?
There’s an egg you could find, with allseeing eye inside.
Can you see a plasmic ball hangs in space full of holes?
Trumpets that create a sound and announce second round;
Number eight repeated twice, and a peacock in disguise;
Flower or peacock’s tail? No one really can tell!
Mushroom that connects to eye; Fish that’s not supposed to fly;
Octopus holds onto snake in the midst of cosmic lake;
The Tree of Life, and palm of hand, with strand of beads that has no end;
Orange snakes, six, all together; Parrot head, and parrot feather
(that could be the stairs or ladder, you could also write with it);
Funky underwater squid; Funky squid holds on to fire -
“magical bird of desire”. It represents mind over matter
(Energy makes up the latter, by the way…To remind you, so to say…)
Heart and mind that work together to turn ideas into matter;
Flower riding on the whale; and a hand that holds whale’s tail;
Whales create a purple beak for the parrot head to seek;
Two of hearts; two lonely spheres;
Rocket-fish that no one hears;
Jelly-fish with three eyes, looking up into the skies.
It stares and thinks about the air - could the life be better there?
Somewhat tulip it will appear; Four coconuts will fall off the tree.
Four coconuts, or moons, or berries, maybe even rotten cherries.
Give them name of your own, and ahead we’ll go on…
Saturn ring with precious gems; Nature’s foot with stalks and stems.
(With stalks and stems instead of muscles,
it runs on air not fuel made of fossils).
In the midst of all there is, treble clef - the final piece.
Treble clef spins and swirls, it connects different worlds.

Rubbish! Delusion! It’s making no sense!
Only if YOU say so, my friends!