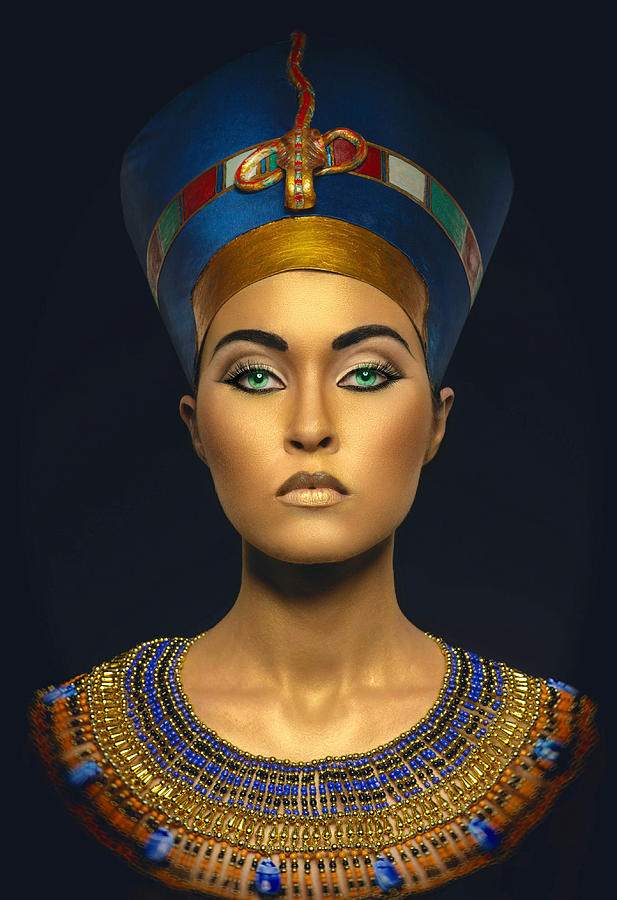 Queen Esther is a piece of digital artwork by Karen Showell which was uploaded on March 28th, 2016.

Who is Queen Esther?... more

Who is Queen Esther?
Read The book of Esther in the Bible Chapters 1 - 10

Introduction
Esther was a Jew from the tribe of Benjamin who grew up as an exile in Persia.
Esther was her Persian name. Her Jewish name was Hadassah. The name Esther means 'star' and is a derivation of the root name of the goddess Ishtar. Hadassah, which means 'Myrtle', is a branch that signifies peace and thanksgiving. Two things Esther did bring to her people.

Esther was an orphan who was brought up by her older cousin, Mordecai (Esther 2:5-7).

The book of Esther is unique in the Bible as the name of God is never directly mentioned there.

The story
The book of Esther touches on the life of more than Esther. The other main characters in this story are:
King Xerxes (also spelt Ahasuerus). He was the powerful King who ruled over 127 provinces.
Queen Vashti, she was the beautiful wife of Xerxes. She refused to show off her beauty to King Xerxes and unwittingly set in motion the rise of Esther.

Then we have Mordecai, Esther's cousin and guardian. He is another key figure in this story. And finally there is Haman the Agagite (Esther 3:1). Agag is a reference to the royal title of the Amalekites, long standing enemies of Israel (Exodus 17; 1 Samuel 15).

In this short study we will concentrate on the life of Esther.
Esther
In Chapter one of the book of Esther we are introduced to king Xerxes who decided to display his abundant wealth for 180 days. As if not enough, it is followed by a seven day feast.
A lavish display of his power indeed.
On the seventh day of the seven day feast, King Xerxes summons Queen Vashti in order to display her beauty to all the people. She refuses to come and is eventually banished from the kings presence as a punishment. A new Queen is sought.
In chapter two Esther is chosen to be Queen. She goes through the normal twelve months of beauty treatment before meeting the King.

Chapter two also records the good deed of Mordecai in saving the Kings life by alerting him of an assassination attempt on his life. This deed is recorded in the record books and later serves as a blessing for Mordecai in the future.

In Chapter three Haman is honoured by the King and given a high position in the kingdom. Haman is annoyed with Mordecai because Mordecai refused to kneel down to him. Haman's anger leads him to plot the execution of all the Jews in the kingdom.

In order to prevent the execution of all the Jews Mordecai calls on Esther to intercede to the King. The only problem here is that the King does not know that Esther is a Jew. Esther has no idea of how the King will respond to this news. Although God is never mentioned in the book of Esther we can see His acts in the background. Nothing takes God unaware.

Esther eventually agrees to appeal to the King. Prior to this she asks Mordecai to organise a time of fasting for her. She is well aware that she needs God's favour if she is to succeed.
Fasting, the abstinence from food for a pre-determined period, is a godly exercise which bring us closer to God.

In Chapter five Esther approaches the King and invites him and Haman to a banquet. This is an attempt to get the timing right before she informs the king about Haman's plot to kill the Jews of which she is one. Esther had hid the fact that she was a Jew from the King on Mordecai's advice.

God's timing is always best. We need to wait for God's timing in doing things. It is dangerous to jump out before time.

Meanwhile Haman's hatred for Mordecai is growing and on the advice of his friends and wife he has a special gallows prepared beside his house on which to hang Mordecai. In Chapter six God moves to save the Jews. The King cannot sleep and asks for the record books to be read aloud to him. The deeds of Mordecai in saving the king in the past are read out.

In an extraordinary twist of events the King asks Haman what should be done to a man who the king wants to honour. Haman, in his arrogance, thinks the king is referring to him and advises a lavish display of wealth and honour to be bestowed on the man publicly. The King orders Haman to do this for Mordecai. Can you imagine the shock, horror and humiliation Haman must have suffered! (You must read the book of Esther)

In chapter seven Esther reveals to the king that she is a Jew and that Haman has plotted to kill them all. Events now take a drastic turn for Haman who ends up getting hanged on the gallows he erected for the death of Mordecai. In Chapter eight, nine and ten all the Jews are saved and Haman's children are killed.

Esther saved the Jews. Her life can teach us several vital lessons

1. There is a preparation time.
She allowed herself to be prepared for the task. God's preparation time can sometimes be long and uneventful. Moses spent 40 years in the desert looking after sheep before coming to deliver the Israelites. The refining of our characters is very essential to God's plan for our life. God cannot use a proud woman (or man).

2. We need the favour of God.
Esther found favour with the King and so did Mordecai. Even Jesus grew in favour with God and man (Luke 2:52). When you live a life pleasing to God, by obeying His will you will find favour with Him. God will also give you favour with people.

3. God works in His own time and season.
Esther got her timing right. Maybe God has put it on your heart to do something for Him. Don't just jump into it but wait for his time. Joseph was in jail until it was God's time for him to be released. God will move in His time when we remain faithful and alert to His leading.

Beautiful Egyptian dress and figure Karen! The story of Esther of Susa, a Jew in Persia, is dramatically told in the film "ONE NIGHT WITH A KING". A 2006 entry in a fairly long line up of films about Esther of the Bible, her secret faith is eventually revealed when time comes to protect her people. One thinks of Nefertiti or Nefertiri when it comes to the huge headdress of the upper and lower valleys of Egypt, displayed here so beautifully in your work! V/ Pamela Artography

A beautiful and inspirational image.

So lovely and regal..

She is DIVINE Karen ♥ L/F

Thank you so much. I am truly honored

Really beautiful! Does most of your work start out as a photo that you work on? Or, is it completely digitally created? Wonderful either way!