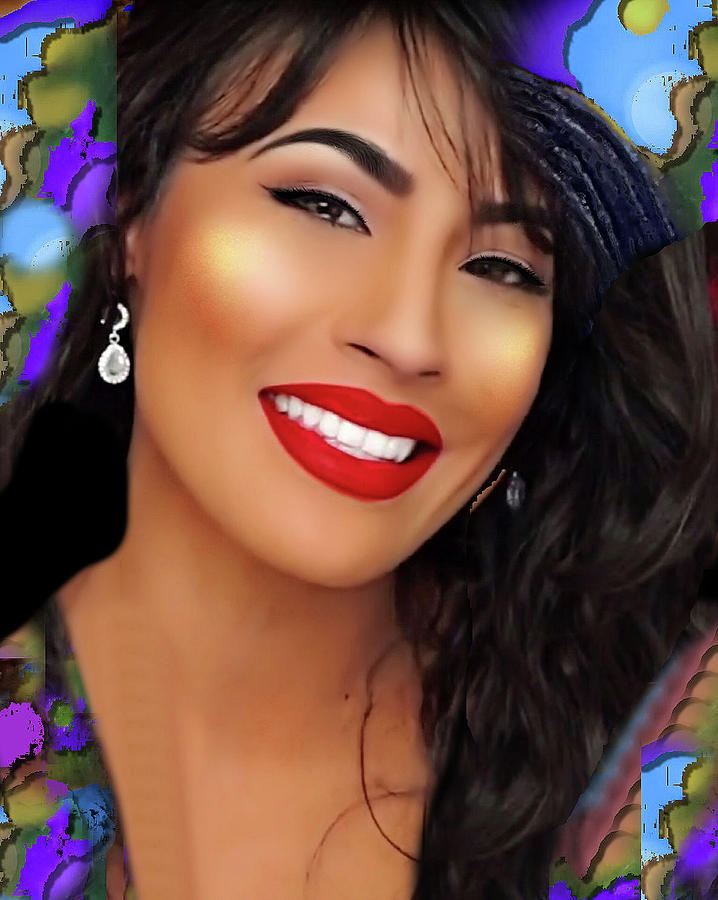 Queen is a piece of digital artwork by Karen Showell which was uploaded on July 19th, 2017.

Who is Selena Quintanilla-Perez?... more

Who is Selena Quintanilla-Perez?

Known as the "Queen of Tejano Music," Selena was a beloved Latin recording artist who was killed by the president of her fan club.

Selena Quintanilla was born on April 16, 1971, in Lake Jackson, Texas. Selena was considered the "Queen of Tejano," a type of Mexican music that incorporated other styles, such as country. She was also sometimes referred to as the "Mexican Madonna" for her sexy outfits and dance moves. Selena began performing as a child.

Around the age of 10, Selena became the lead singer in her family's band, Selena Y Los Dinos. The musical group started out playing weddings and clubs in their native Texas. The band featured her brother Abraham on bass guitar and her sister Suzette on the drums. Her father, Abraham, a former musician, managed and produced the group. Selena grew up speaking English, but her father taught her to sing in Spanish so she could resonate with the Latino community. She learned the lyrics phonetically at first and eventually learned to speak Spanish fluently.

Selena became very popular with Tejano music fans, and at the 1987 Tejano Music Awards, she won both "Best Female Vocalist of the Year" and "Performer of the Year." Her 1990 album, Ven Conmigo, was the first Tejano record to achieve gold record status, meaning it sold more than 500,000 copies. In 1992, Selena took enough of a break from her hectic schedule to marry Chris Perez, the band's lead guitarist, that April.


Her recordings continued to have strong sales, and she won the Grammy Award (best Mexican-American album) in 1993 for her album Live. In 1994, she and the band played numerous tour dates in New York, California, Puerto Rico and Argentina. Amor Prohibido was released that same year and went gold.

Soon after Live's release, Selena went to work on an English-language album that she hoped would put her on the top of the U.S. pop music charts. Unfortunately, she did not live to see its success. Selena died on March 31, 1995, in Corpus Christi, Texas, after being shot by Yolanda Saldivar, the founder of the Selena fan club. Saldivar had been managing Selena's boutique in San Antonio and was about to be fired for embezzling money. Selena's murder sent shockwaves through the Latino community, and her fans around the world mourned the singer's passing.

Selena's first English-language album, Dreaming of You, was released after her death and became a huge hit. Her music remains popular today. Since her untimely death, Selena's life story has been the subject of a 1997 film, Selena, which stars Jennifer Lopez as the Tejano superstar and James Edward Olmos as her father.

We strive for accuracy and fairness. If you see something that doesn't look right, contact us!


FAMOUS THE AMERICAN SCHOOL OF CORRESPONDENCE IN CHICAGO, ILLINOIS ALUMNI
FAMOUS SINGERS
Show All Groups
1 of 10« »
QUOTES
“If you try to come off as this big-time star with an attitude, people don't like that.”
—Selena

Born on April 16, 1971 in Lake Jackson, Texas, Selena Quintanilla made her recording debut in the '80s, going on to become an award-winning recording artist in the Latin music scene with albums like Amor Prohibido and Selena Live. In 1995, she was murdered by the founder of her fan club. Her last album, Dreaming of You, was released posthumously in 1995.

Selena is a big favorite with me. I showed the SELENA movie to my students who needed inspiration and we all loved her! Lovely work of art FAVORITE for this gem!

You are beautiful dear Karen Showell.

Thank you so much. I am truly honored