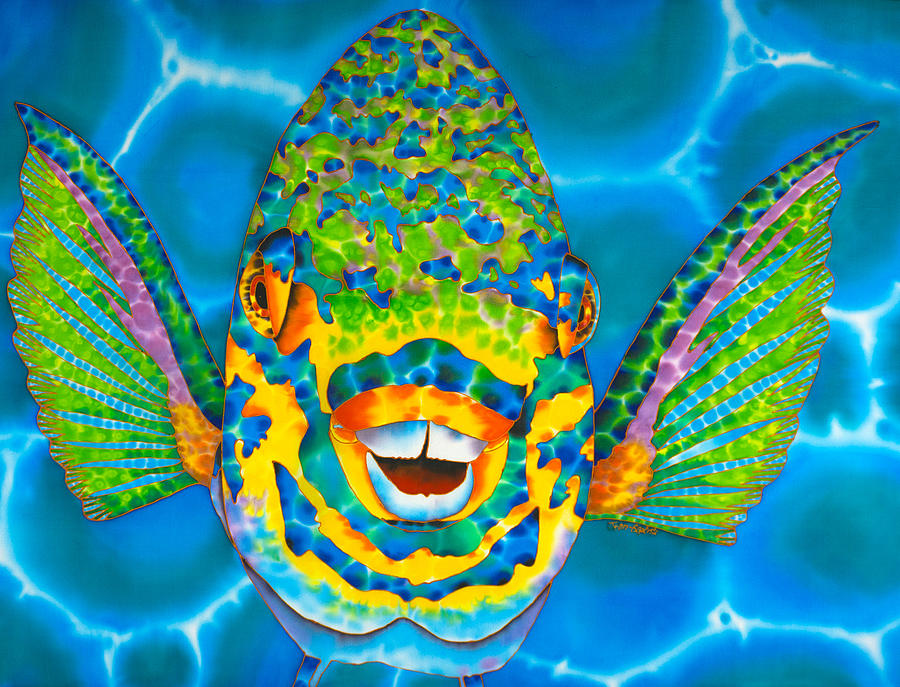 Queen of Barbados is a painting by Daniel Jean-Baptiste which was uploaded on December 5th, 2019.

The queen parrotfish (Scarus vetula) is a species of parrotfish found on reefs in the tropical West Atlantic Ocean and the Caribbean Sea. Other... more

The queen parrotfish (Scarus vetula) is a species of parrotfish found on reefs in the tropical West Atlantic Ocean and the Caribbean Sea. Other common names include blownose, blue chub, blue parrotfish, blueman, joblin crow parrot, moontail, okra peji and slimy head.[1] The young males and adult female queen parrotfish are a reddish-brown color, and quite different in appearance from the bluish-green color of the final phase male. This is a common species throughout its range and the International Union for Conservation of Nature has rated its conservation status as "least concern".

Adult queen parrotfishes are heavy-bodied fish with fusiform (spindle-shaped) bodies and beak-like mouths, growing to a length of about 60 cm (24 in). They have two different color phases. Among smaller fish, the sexes are similar but nearly all individuals are female, being reddish-brown or grayish-brown with a paler head and a white lateral stripe low on each flank, and that remains the color scheme for females even when they grow larger.[3] At an average length of 25 cm (10 in), females change sex to become males. The larger males move on to a new color phase, becoming pale bluish-green, with blue spots near the mouth, yellowish streaks between the mouth and eye, and pale blue bars on the pectoral fins.

A big thank you to the buyer from St. John, stay safe.

I would like to thank the buyer fro Texas, stay safe.