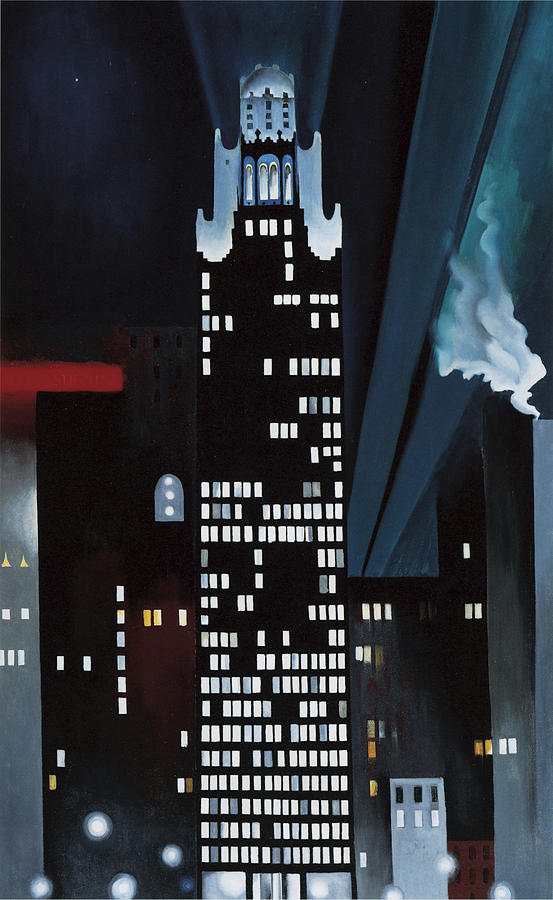 Radiator Building Night New York is a photograph by Georgia O Keeffe which was uploaded on November 6th, 2015.

Georgia Totto O'Keeffe (November 15, 1887-March 6, 1986) was an American artist. She is best known for her paintings of enlarged flowers, New York skyscrapers, and New Mexico landscapes. O'Keeffe has been recognized as the "Mother of American modernism".

Georgia O'Keeffe was born in a farmhouse located at 2405 Hwy T in the town of Sun Prairie, Wisconsin. Her parents, Francis Calyxtus O'Keeffe and Ida (Totto) O'Keeffe, were dairy farmers. Her father was of Irish descent. Her maternal grandfather, George Victor Totto, for whom O'Keeffe was named, was a Hungarian count who came to America in 1848.

O'Keeffe was the second of seven children and the first daughter. She attended Town Hall School in Sun Prairie. By age ten she had decided to become an artist, and she and her sister received art instruction from local watercolorist Sara Mann. O'Keeffe attended high school at Sacred Heart Academy in Madison, Wisconsin, as a boarder between 1901 and 1902. In the fall of 1902, the O'Keeffes moved from Wisconsin to the close-knit neighborhood of Peacock Hill in Williamsburg, Virginia. O'Keeffe stayed in Wisconsin with her aunt and attended Madison High School, then joined her family in Virginia in 1903. She completed high school as a boarder at Chatham Episcopal Institute in Virginia (now Chatham Hall), and graduated in 1905. She was a member of the Kappa Delta sorority.

O'Keeffe studied at the School of the Art Institute of Chicago from 1905 to 1906.In 1907, she attended the Art Students League in New York City, where she studied under William Merritt Chase. In 1908, she won the League's William Merritt Chase still-life prize for her oil painting Dead Rabbit with Copper Pot. Her prize was a scholarship to attend the League's outdoor summer school in Lake George, New York. While in the city in 1908, O'Keeffe attended an exhibition of Rodin's watercolors at the gallery 291, owned by her future husband, photographer Alfred Stieglitz.

O'Keeffe abandoned the idea of pursuing a career as an artist in the fall of 1908, claiming that she could never distinguish herself as an artist within the mimetic tradition which had formed the basis of her art training. She took a job in Chicago as a commercial artist. She did not paint for four years, and said that the smell of turpentine made her sick. She was inspired to paint again in 1912, when she attended a class at the University of Virginia Summer School, where she was introduced to the innovative ideas of Arthur Wesley Dow by Alon Bement. Dow encouraged artists to express themselves using line, color, and shading harmoniously. From 1912-14, she taught art in the public schools in Amarillo in the Texas Panhandle. She attended Teachers College of Columbia University from 1914-15, where she took classes from Dow, who greatly influenced O'Keeffe's thinking about the process of making art. She served as a teaching assistant to Bement during the summer from 1913-16 and taught at Columbia College, Columbia, South Carolina in the fall of 1915, where she completed a series of highly innovative charcoal abstractions. After further course work at Columbia in the spring of 1916 and summer teaching for Bement, she took a job as head of the art department at West Texas State Normal College from fall 1916 to February 1918, the fledgling West Texas A&M University in Canyon just south of Amarillo. While there, she often visited the Palo Duro Canyon, making its forms a subject in her work.