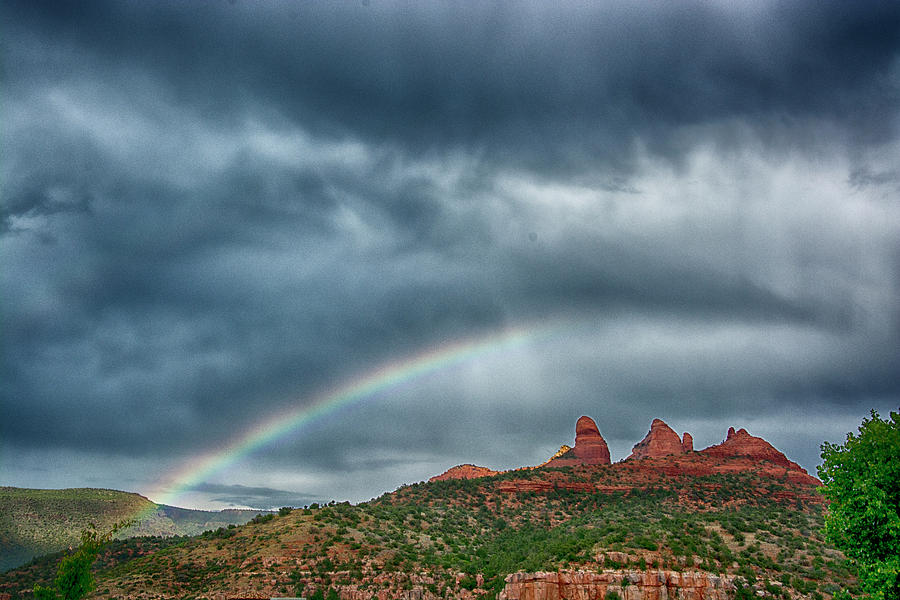 Rainbow Over Uptown is a photograph by Tom Kelly which was uploaded on July 24th, 2019.

One of my favorite times to be in Sedona is during summer, after the monsoon rains start. Although it ia very humid, the weather is wild. I have seen... more

One of my favorite times to be in Sedona is during summer, after the monsoon rains start. Although it ia very humid, the weather is wild. I have seen hail storms, major rainstorms, and beautiful Rainbows.Sedona /sɪˈdoʊnə/ is a city that straddles the county line between Coconino and Yavapai counties in the northern Verde Valley region of the U.S. state of Arizona. As of the 2010 census, its population was 10,031.[5] Most of the city lies in Yavapai County, with a portion in the east located in Coconino County.

Sedona's main attraction is its array of red sandstone formations. The formations appear to glow in brilliant orange and red when illuminated by the rising or setting sun. The red rocks form a popular backdrop for many activities, ranging from spiritual pursuits to the hundreds of hiking and mountain biking trails.

Sedona was named after Sedona Arabella Miller Schnebly (1877–1950), the wife of Theodore Carlton Schnebly, the city's first postmaster, who was celebrated for her hospitality and industriousness.[6] Her mother, Amanda Miller, claimed to have made the name up because "it sounded pretty".[7]

Thanks so much Laurie!

Thanks so much Beverly!!

Congrats on Your Sale!!.....A Beautiful Blessing.

Thanks so much to the nice Folks who Purchased this new photo of Mine!!

Thanks so much Ben!!