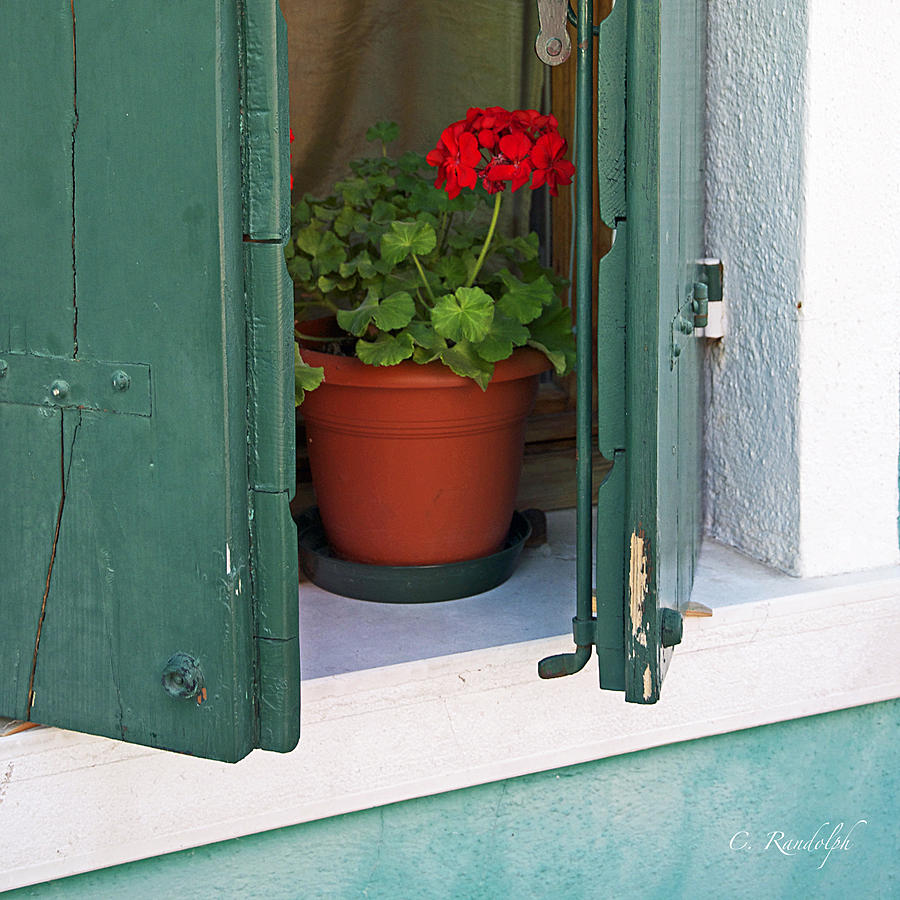 Red Geranium is a photograph by Cheri Randolph which was uploaded on August 9th, 2012.

Red geraniums are among the most familiar flowering plants, flourishing on porches, in window boxes and garden beds all over the United States and elsewhere. Known to horticulturists by the Latin species name, Pelargonium x hortorum, the big, bright, red flowers are the result of many decades of hybridization. Both Pelargoniums and their hardy relatives, the "true" geraniums or cranesbills, are members of the larger Geraniaceae family. They have many meanings--cultural, literary and linguistic.

The most popular red geraniums are the so-called "zonals," which feature round flowerheads and leaves with faint or distinct "zones" or bands of contrasting color. The zonals are descended from two South African species, Pelargonium inquinans and Pelargoinum zonale, which arrived in England early in the eighteenth century, probably from the Netherlands. They have gone in and out of fashion ever since, but reached a high point during the Victorian period. Author Susan Condor quotes Victorian author W.J. May, who noted that in his era, scarlet varieties were so numerous that is was hard to tell them apart.

Geraniums in Literature
Many authors have used red geraniums in descriptions of domestic scenes. In Louisa May Alcott's "Little Women" (1868), one of the characters cultivates a red geranium. This is also true in E.M. Forster's "A Room With A View" (1908). In "To Kill a Mockingbird," (1960) Harper Lee uses the flowers as a symbol of civility and self-respect when she describes the red geraniums that one character, Mayella Ewell keeps, in jars outside the rundown Ewell homestead. Mayella is aspiring to a more genteel lifestyle in her choice of the flowers.

Red Flowers symbolism:
There is good reason red roses are given to sweethearts. It�s because red is symbolic of passion, love, and energy. Red runs through our bodies in raging rivers of blood. Red rushes to our cheeks when we feel the heat of our feelings. Red resonates with the root chakra and reminds us of our animal instincts. Indeed, red is the spark that kindles our most fervent flames of desire. Send red flowers to someone who needs a jolt of energy � this shock of color is sure to get their engines revving!

Do you know, I knew this was in Burano even before I checked your description! I remember a window like this that was this exact color. The time I saw it, there were no geraniums, but an adorable little elderly Italian woman sort of hanging out the window who very obligingly let us take her photograph. It was, however, before I had moved into the digital age, so I haven't uploaded if. Love your capture! And thanks for the fond memory!!

Randy, I appreciate the feature of "Red Geranium" in the Wisconsin Flowers Group. Thanks for your support!

Glenda, Thanks! Glad you liked it.

David & Carol, thanks for your compliment!

Joyce, Thanks for the compliment!

Judy, thanks for visiting! Appreciate your compliment and F/V.

Thanks, Theresa. In Burano vivid colors were a big part of the landscape. Appreciate the f/v!

Leslie, Thanks for your compliment & vote.

Allen, I'm glad that you enjoyed this one & thanks for the vote!

Jose, Thanks for your feature of "Red Geranium" in Stop Time with Art Group.

Tamyra, Thanks very much for your compliment and the f/v!

Bruce, Thanks so much for featuring "Red Geranium" in the Comfortable Art Group! I appreciate your support.

Sandra, Thanks so much for featuring "Red Geranium" in the Memories and Nostalgia Group!

Ruth, thanks for visiting and posting a nice compliment!

Nadine & Bob, Many thanks for the feature of "Red Geranium" in your group, USA ARTIST NEWS! It is much appreciated!

v18, great image, love the way it is framed and the colors really pop.

Bob, thanks for your nice compliment and the vote as well!

Deborah, thanks for visiting

Barbara, Thanks for visiting

Sorin, Thanks! I appreciate your compliment.

Natalie, so nice of you to comment and lend this photo your generous promotional support. Thanks!