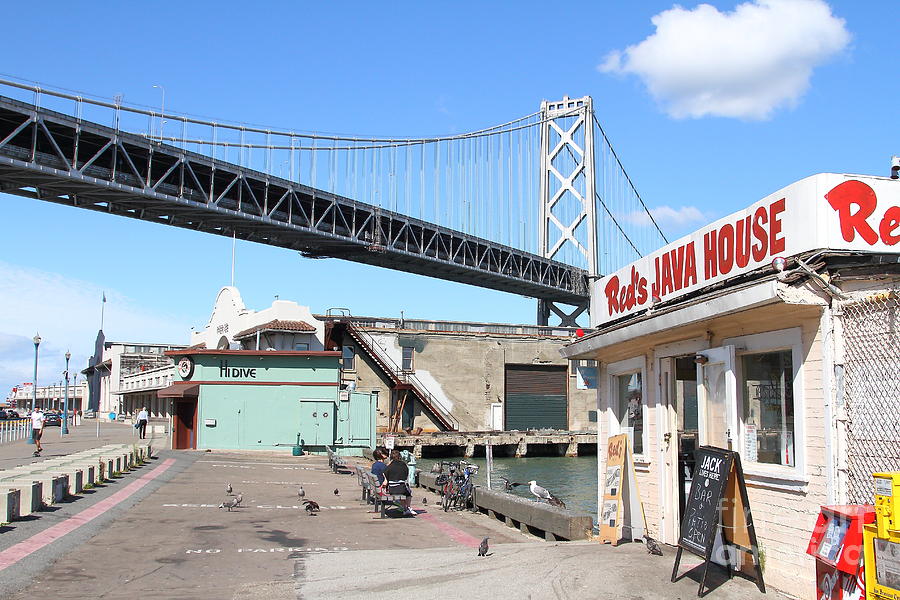 Reds Java House and The Bay Bridge at San Francisco Embarcadero . 7D7712 is a photograph by Wingsdomain Art and Photography which was uploaded on October 2nd, 2011.

The Embarcadero (Spanish: Wharf), is the eastern waterfront and roadway of the Port of San Francisco, San Francisco, California, along San Francisco Bay, constructed atop an engineered seawall on reclaimed land. It derives its name from the Spanish verb embarcar, meaning "to embark"; embarcadero itself means "the place to embark". The Central Embarcadero Piers Historic District was added to the National Register of Historic Places on November 20, 2002.

The Embarcadero right-of-way begins at the intersection of Second and King Streets near AT&T Park, and travels north, passing under the San Francisco – Oakland Bay Bridge. The sidewalk along the waterfront between Harrison Street and Broadway was named "Herb Caen Way..." after the death of celebrated local columnist Herb Caen in 1997. The three dots, or ellipsis, deliberately are included in honor of columnist Herb Caen's Pulitzer Prize winning writing style. The Embarcadero continues north past the Ferry Building at Market Street, Fisherman's Wharf, and Pier 39, before ending at Pier 45. A section of The Embarcadero which ran between Folsom Street and Drumm Street was formerly known as East Street.

Red’s Java House, the most famous of all waterfront dives, or as The Chronicle’s Carl Nolte once put it, “the Chartres Cathedral of cheap eats.” There is still no place quite like Red’s on Pier 30, not even its estranged sibling down the road (Java House, which has its own type of charm), and there likely won’t be again. It’s a San Francisco institution, with a rich history — and with a possible Warriors arena on Piers 30-32, its future is sure to be an interesting one as well.

Thank you everyone for your kind words. -W

Congratulations on your sale Wings!!

Congrats on your sale today Wings!

Thank you buyer from Brookings Harbor, OR for purchase two fine art prints of this photograph. I am eternally grateful and humbled and I thank you for contributing to my obssession - Art and Photography. -W