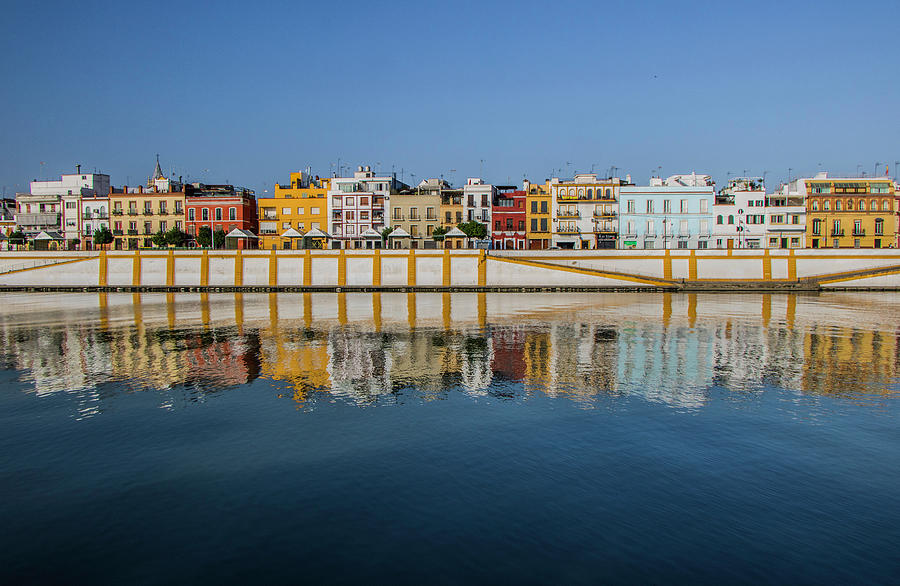 Reflections of Seville is a photograph by Venetia Featherstone-Witty which was uploaded on March 20th, 2020.

Seville is a Spanish city, the capital of the autonomous community of Andalusia and the province of Seville. It is situated on the lower reaches of... more

Seville is a Spanish city, the capital of the autonomous community of Andalusia and the province of Seville. It is situated on the lower reaches of the River Guadalquivir, in the southwest of the Iberian Peninsula. Seville is the largest city in Andalusia Its old town, with an area of 4 square kilometers, contains three UNESCO World Heritage Sites: the Alcázar palace complex, the Cathedral and the General Archive of the Indies. The Seville harbour, located about 80 kilometers (50 miles) from the Atlantic Ocean, is the only river port in Spain.
Seville was founded as the Roman city of Hispalis. It became known as Ishbiliyya after the Muslim conquest in 712. During the Muslim rule in Spain, Seville came under the jurisdiction of the Caliphate of Córdoba before becoming the independent Taifa of Seville; later it was ruled by the Muslim Almoravids and the Almohads until finally being incorporated into the Christian Kingdom of Castile under Ferdinand III in 1248. After the discovery of the Americas, Seville became one of the economic centers of the Spanish Empire as its port monopolized the trans-oceanic trade and the Casa de Contratación (House of Trade) wielded its power, opening a Golden Age of arts and literature. In 1519, Ferdinand Magellan departed from Seville for the first circumnavigation of the Earth. Coinciding with the Baroque period of European history, the 17th century in Seville represented the most brilliant flowering of the city's culture; then began a gradual economic and demographic decline as silting in the Guadalquivir forced the trade monopoly to relocate to the nearby port of Cádiz.

The 20th century in Seville saw the tribulations of the Spanish Civil War, decisive cultural milestones such as the Ibero-American Exposition of 1929 and Expo '92, and the city's election as the capital of the Autonomous Community of Andalusia.

Thank you very much for your professional critique of my work - I really appreciate it!

Congratulations!! This beautiful image has been selected to be featured for the week in the “Shadow Silhouettes and Reflections Outdoors” Group Home Page. You are welcome to add a preview of this featured image to the group’s discussion post titled “2020 July: Stunning Group Featured Images and Thank-you’s” for a permanent display within the group, to share this achievement with others. You are also welcome to share your featured image on our new Facebook page: https://www.facebook.com/groups/247552766180931/ Thank you for your participation in the group! (July 15, 2020)

Thank you very much for the feature, Jan.

Congratulations - Your beautiful artwork has been featured in the "Travel Art" gallery at Fine Art America! For further promotion, you can post it to the specific Travel Destinations galleries, our Facebook group and our Pinterest board - all the links are provided on our group's homepage: https://fineartamerica.com/groups/1-travel-art.html ** Want to post on our group's blog: travelartpix.com? Check the group's homepage for details!

Thank you very much Tatiana for the feature!

Thank you very much for the feature John!