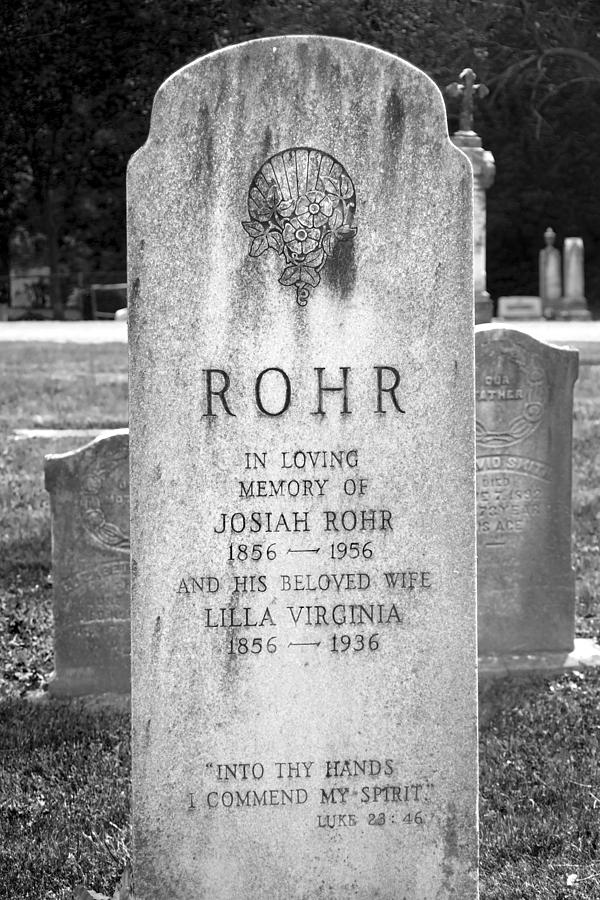 Remembering A Century Lived is a photograph by Douglas Taylor which was uploaded on October 23rd, 2021.

This headstone memorializing Josiah Rohr and his wife Lilla Virginia Rohr was found at Mountain View Cemetery in Sharpsburg, Maryland. It is across... more

This headstone memorializing Josiah Rohr and his wife Lilla Virginia Rohr was found at Mountain View Cemetery in Sharpsburg, Maryland. It is across the street from Antietam National Cemetery, and one look at the dates on this marble marker bring to mind the history of the century lived by Josiah Rohr.

Born in 1856 at Boonesboro, Maryland, he would have been witness to the Civil War and in particular the Battle of Antietam when he was seven years old. As a young man Rohr would have seen the opening of the American West along with the industrial development of the east. He would have known of the Spanish-American War, both World Wars, and Korea. He would also have lived through the assasinations of Presidents Lincoln, Garfield and McKinley; then the Roaring Twenties followed by the Great Depression.

Consider that in his century Rohr would have also seen the rise of wonders in electricity; the telegraph, telephone, radio, television, electrical lighting and rural electrification. He also would have witnessed the two revolutions in transportation, the automobile and the airplane. And of course during this lifetime the world of science made extraordinary leaps that brought Rohr from candle light and whale oil to the atomic age!

His longevity for the age in which he lived was remarkable, as was the age Josiah Rohr lived in.