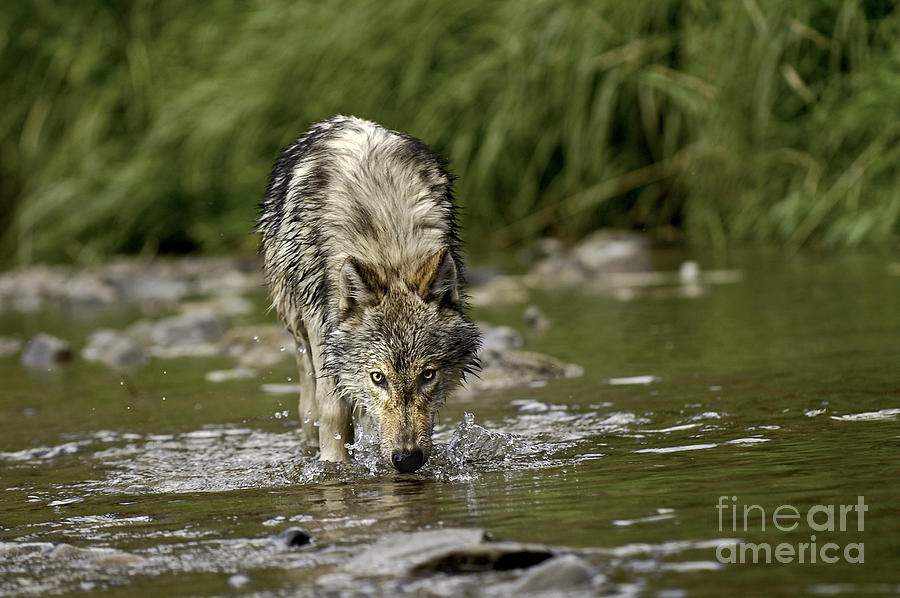 Replenish is a photograph by Wildlife Fine Art which was uploaded on July 10th, 2013.

A lone wolf replenish thirst on a hot summer day. Wolves often use waterways to cool down in the water. A wolf is a incredible predator. There were... more

A lone wolf replenish thirst on a hot summer day. Wolves often use waterways to cool down in the water. A wolf is a incredible predator. There were no wolves in Yellowstone in 1994. The wolves that were reintroduced in 1995 and 1996 thrived and there are now over 300 of their descendants living in the Greater Yellowstone Area.
The real wolf facts about why wolves howl are, Saying hello - Wolves howl to greet fellow pack members,
Communicate location - Howling is the most effective way for a member of the pack to call another to its location.
Mark territory - Howls give warning to other wolves about a pack's territory boundaries.
Call together - If a kill has been made, the best way to bring the pack together is to howl.
Wolves are excellent hunters and have been found to be living in more places in the world than any other mammal except humans.
Wolves have killed 2 people in very recent years. Since recorded history here in North America in 10,000 years many attacks have happen but fatal deaths is extremely rare.
Wolves have two layers of fur, an undercoat and a top coat, which allow them to survive in temperatures as low as minus 40 degrees Celsius! In warmer weather they flatten their fur to keep cool.
Wolves have sweat glands in between their paws.
Wolves in the wild have short life span, the average is only 6 to 8 years. The cubs weigh approximately one pound at birth and deaf and blind. A wolf pups eyes are blue at birth. Their eyes turn yellow about the time they are 6-8 months old.
Wolves breed only once a year, December through March, depending on latitude, the gestation period is 63 days.
The wolf has extremely powerful jaws capable of generating 1,500 psi pressure, bite strength of 500-700 pounds per
square inch is about the highest for large dogs compared to a 120 psi for a human. Wolves run on their toes, which helps them to stop and turn quickly and to prevent their paw pads from wearing down.
Wolves can swim long distances aided by small webs between their toes. Their bodies don't sweat moisture; they do however sweat though their feet. A light-reflecting layer on a wolfs eye call

Thank you very much !

WOW! What an intense capture!

Thank you very much !

Thanks for the FAV JAN !

Fantastic capture! It's amazing to see the wolf looking right into the camera, and the splashing water is wonderful! Vote and fave. F/L/V

Thank you very much Amy !

Thank you for the great comments !