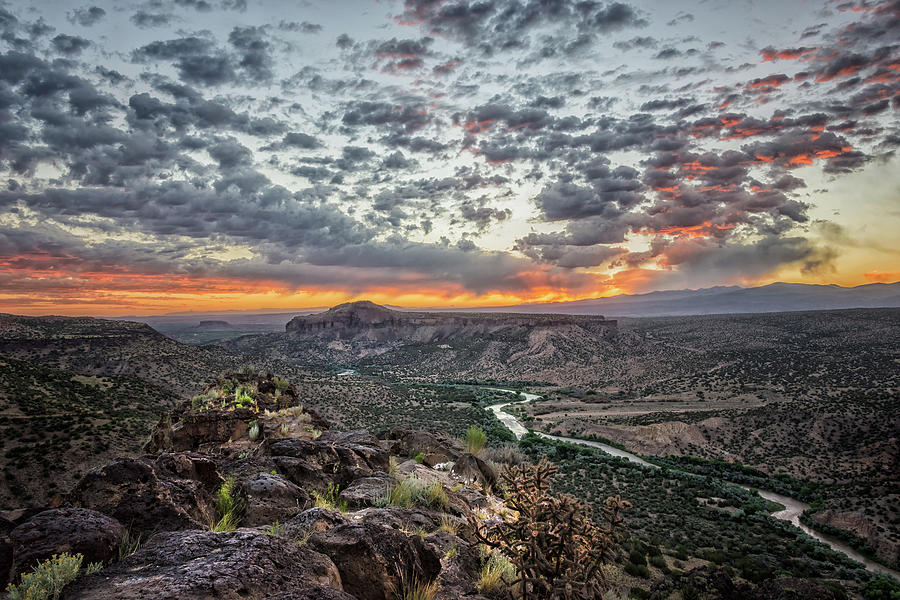 Rio Grande River Sunrise 2 - White Rock New Mexico is a photograph by Brian Harig which was uploaded on August 4th, 2014.

Join with me to save nature, one photograph at a time. Yes, it's true. With every item purchased, we plant ten trees in countries ravaged by... more

Join with me to save nature, one photograph at a time. Yes, it's true. With every item purchased, we plant ten trees in countries ravaged by deforestation. This project is saving the planet and empowering others to transform their communities through environmental, economic, and spiritual growth. Join the movement.

As the sun rises over the Santa Fe Mountains, the cloud-filled sky is set ablaze with oranges and golds. The Rio Grande river valley is bathed in warm light as Black Mesa and the Taos Mountains become visible.

This was a total labor of love. My wife and I moved to Santa Fe in Feb of 2014. After we got settled in, my wife looked up places to shoot a sunrise near Santa Fe. White Rock was one of those places. The next morning, I drove the one hour to get a shot. It was okay, but I knew it could be better. It took me 4 months and 16 more attempts to get the shot you see. It was June 1st. And, the light coloring the bottoms of those clouds only lasted about 10 seconds. I literally only have ONE shot of this.

The Rio Grande (Spanish: Rio Bravo del Norte or Rio Bravo) is a river that flows from southwestern Colorado in the United States to the Gulf of Mexico. Along the way it forms part of the Mexico-United States border. According to the International Boundary and Water Commission, its total length was 1,896 miles in the late 1980s, though course shifts occasionally result in length changes. Depending on how it is measured, the Rio Grande is the fourth or fifth longest river system in North America.
The river serves as a natural border between the U.S. state of Texas and the Mexican states of Chihuahua, Coahuila, Nuevo Leon, and Tamaulipas. A very short stretch of the river serves as the boundary between the U.S. states of Texas and New Mexico. Since the mid 20th century, heavy water consumption of farms and cities along the river has left only 20% of its natural discharge to flow to the Gulf. Near the river's mouth, the heavily irrigated Rio Grande Valley is an important agricultural region. The Rio Grande is one of 19 Great Waters recognized by the America's Great Waters Coalition.
The Rio Grande's watershed covers 182,200 square miles. Many endorheic basins are situated within, or adjacent to, the Rio Grande's basin, and these are sometimes included in the river basin's total area, increasing its size to about 336,000 square miles.

Congratulations on your sale, Brian!

Congratulations! I have chosen this piece to be featured in the Art for the Love of Art group.

Congratulations Brian, your Fine Art Photograph is being featured this week on the Home Page of the FAA Group "The Magic Hour Of Blue And Gold Photography". To ensure that your feature is archived properly, I invite you to post your photograph in the group's “Featured Photographs And Thank You Thread #5 January/2021, located in the Discussions link. You are invited to post your own individual “Thank You For The Feature(s)” thread as well.

Congratulations Brian your amazing artwork is being featured in Over 5000 Views:-) Please take a moment to add your beautiful art to our archives in the message area and have a wonderful day!

Congratulations Brian on being featured in the FAA Group 'Off the Beaten Path.' To ensure your feature remains available over time, post your featured image(s) in the Group's 'Thanks for the Feature / Image Archive.’ l/f/t/p

Thank you so much

Congratulations Brian on your feature in Spirit of the West Photographs only! Fantastic!

Congratulations on your new sale Brian

Congratulations! Your extraordinary work has been Featured in the Fine Art America group “The Earth Is Art”! You are invited to archive your featured image for permanent storage and for viewing on the Discussions Page in: “2018 Member's Extraordinary Features Images Archive 3.0!” theme. Simply copy your image’s Embed URL on your image’s profile page, and paste it into the Discussion Topic site: https://fineartamerica.com/groups/the-earth-is-art-.html?showmessage=true&messageid=4138611

Congratulations!! This beautiful image has been selected to be featured for the week in the “Art Forever With You” Group Home Page. You are welcome to add a preview of this featured image to the group’s discussion post titled “April 2018 Stunning Group Featured Images” for a permanent display within the group, to share this achievement with others. If the activity is allowed, your image will also be posted to our group Google+ page. Thank you for your participation in the group! ~Jan

Oh My. Love that sky! Congrats

Extraordinary view, Brian ! Congratulations on your sale ! My Best ...