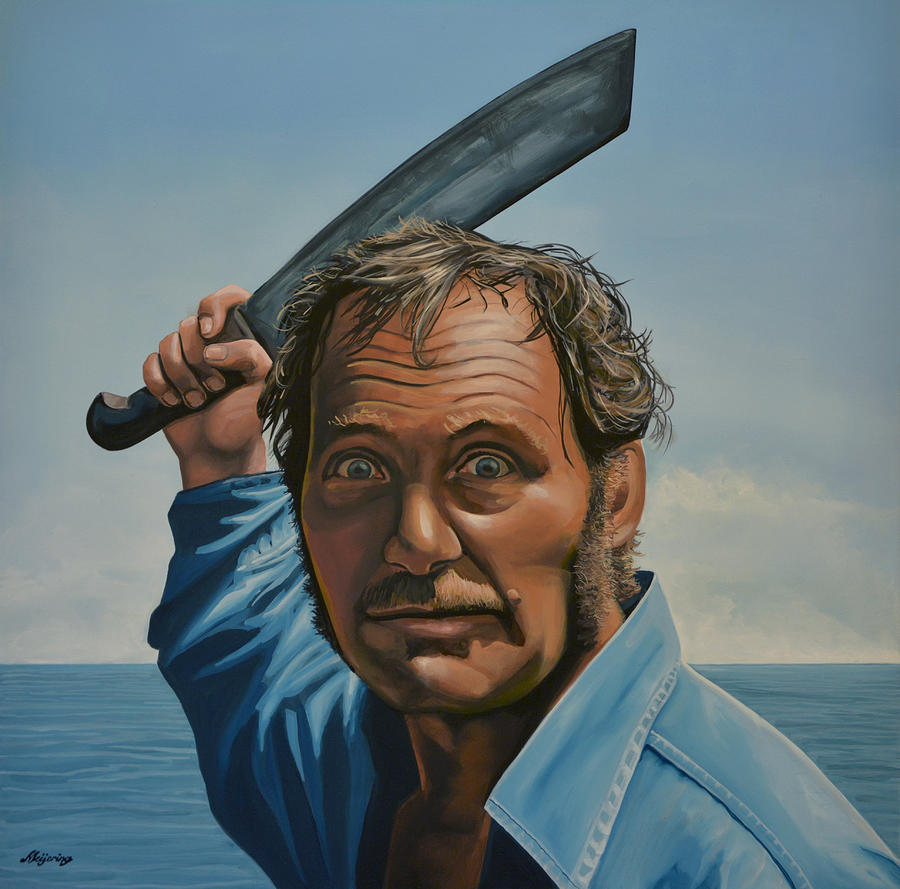 Robert Shaw in Jaws is a painting by Paul Meijering which was uploaded on November 26th, 2012.

Robert Shaw in the movie Jaws - realistic acrylic painting by the Dutch fine artist Paul Meijering - the Original painting is 90 x 90 cm and for... more

Jaws is a 1975 American thriller film directed by Steven Spielberg and based on Peter Benchley's 1974 novel of the same name. In the story, a giant man-eating great white shark attacks beachgoers on Amity Island, a fictional New England summer resort town, prompting the local police chief to hunt it with the help of a marine biologist and a professional shark hunter. The film stars Roy Scheider as police chief Martin Brody, Robert Shaw as shark hunter Quint, Richard Dreyfuss as oceanographer Matt Hooper, Murray Hamilton as Larry Vaughn, the mayor of Amity Island, and Lorraine Gary as Brody's wife, Ellen. The screenplay is credited to both Benchley, who wrote the first drafts, and actor-writer Carl Gottlieb, who rewrote the script during principal photography.

Congratulations!! This stunning image has been selected to be featured for the week in the “Art Forever with You” Group Home Page. You are welcome to add a preview of this featured image to the group’s discussion post titled “2020 October: Stunning Group Featured Images and Thank-you’s” for a permanent display within the group, to share this achievement with others. Also feel free to post your feature on our group Facebook page: https://www.facebook.com/groups/296998814248643/ Thank you for your participation in the group! ~Jan (October 5, 2020)

Congratulations!!! Your awesome artwork has been featured in Pretty in Pink Blue and Purple. Please do add it to our featured discussion page. l/f/

Congratulations your beautiful art is being featured in The World We See:-)

All of your work is awesome!

Love it. Great piece. And Congrats on your sale!

Thank you so much, Silvana!;-)

Thanks so much, Chrisann, for your compliments and the feature!

Thank you so much, Rebecca!!

Thank you so much, Gerald!