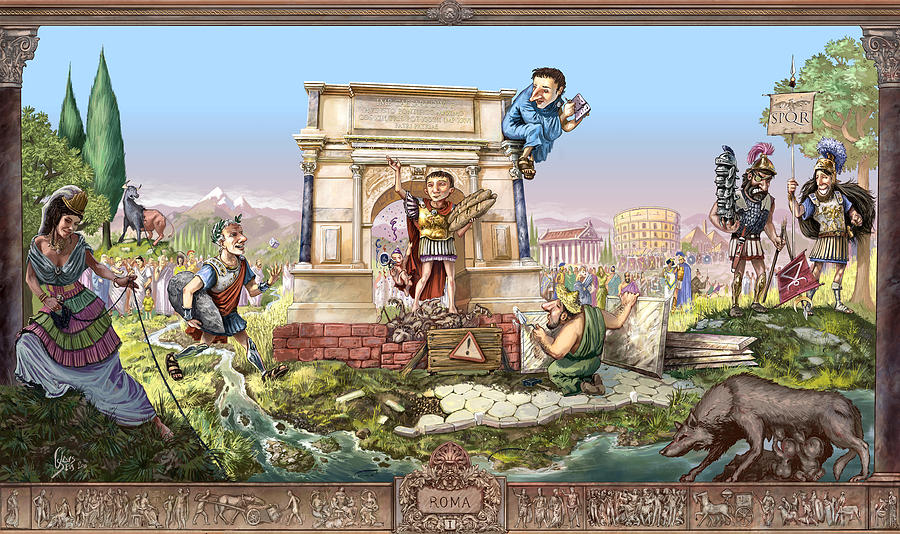 Roma I is a piece of digital artwork by Odysseas Stamoglou which was uploaded on March 15th, 2015.

A representation of some of the most important and funny themes in roman history, up to the reign of Augustus.... more

A representation of some of the most important and funny themes in roman history, up to the reign of Augustus.

*SPOILER ALERT!*
Do not read further if you 'd like to identify the characters for yourself!
In any case here they are, from left to right:
-Queen Dido, the legendary queen of Carthage. An exile from her homeland in Tyre, she wandered with her people southwest until she found the right spot to build her city. When she asked the local powerful king for land, he agreed to give "Only so much could be bought as their wit could surround by a bull�s hide."(Virgil) The legendary Queen then cut the hide in a very thin stripe and surrounded an area with it, thus marking the territory of her future great city.

- Julius Caesar, just returning from Gaul with a little souvenir, tossing his die in the air while crossing the Rubicon.

- Augustus, the first and greatest emperor of the Romans.

- Livy, our most important source of ancient Roman legends and history, from the humble beginnings up to the reign of Augustus.

- The builder is a simple guy from the mob, so often we tend to forget about them!

- Finally, to the right we have the famous protagonists of the Great Punic wars, Hannibal and Scipio.