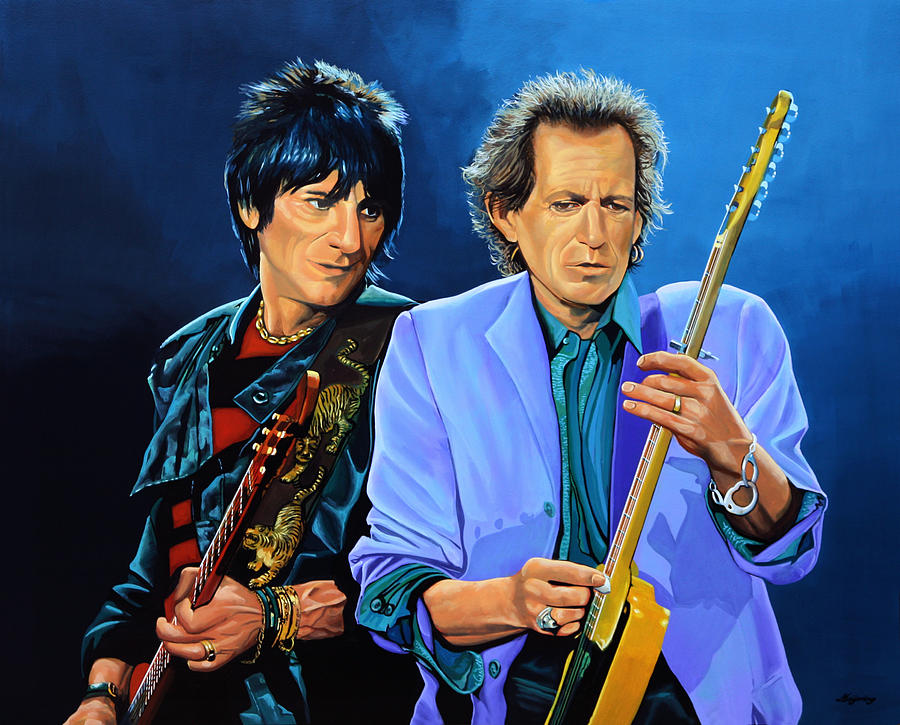 Ron Wood and Keith Richards is a painting by Paul Meijering which was uploaded on April 30th, 2012.

The Rolling Stones are an English rock band formed in London in 1962. The original line-up consisted of Brian Jones (rhythm guitar, harmonica), Mick Jagger (lead vocals), Keith Richards (lead guitar, backing vocals), Ian Stewart (piano), Bill Wyman (bass), and Charlie Watts (drums). Stewart was removed from the official line-up in 1963 but continued as a touring member until his death in 1985. Jones left the band less than a month prior to his death in 1969, having already been replaced by Mick Taylor, who remained until 1974. After Taylor left the band, Ronnie Wood took his place in 1975 and has been on guitar in tandem with Richards ever since. Following Wyman's departure in 1993, Darryl Jones joined as their touring bassist. Other touring keyboardists for the band have been Nicky Hopkins (1967-82), Billy Preston (through the mid 1970s) and Chuck Leavell (1982-present). The band was first led by Jones, but after teaming as the band's songwriters, Jagger and Richards assumed leadership while Jones dealt with legal and personal troubles.

Thank you so much, Dan, for your support and the feature in your awesome group!!;-))

Thank you so much, Ronel, for your support, compliments and the feature in your wonderful group!!;-)

Congratulations! Your creative art is now featured in the "BLUE" group! - Pamela.

Thank you so very much, Pamela, for the support and the feature in your wonderful group!;-)...

Thank you so very much, Naomi, for the support and the feature in your wonderful group!;-)...

Thank you so very much, John, for the support and the feature in your exciting group!;-)...

Fantastic portraiture - u have done it again! L

Thank you so much, Alfred!