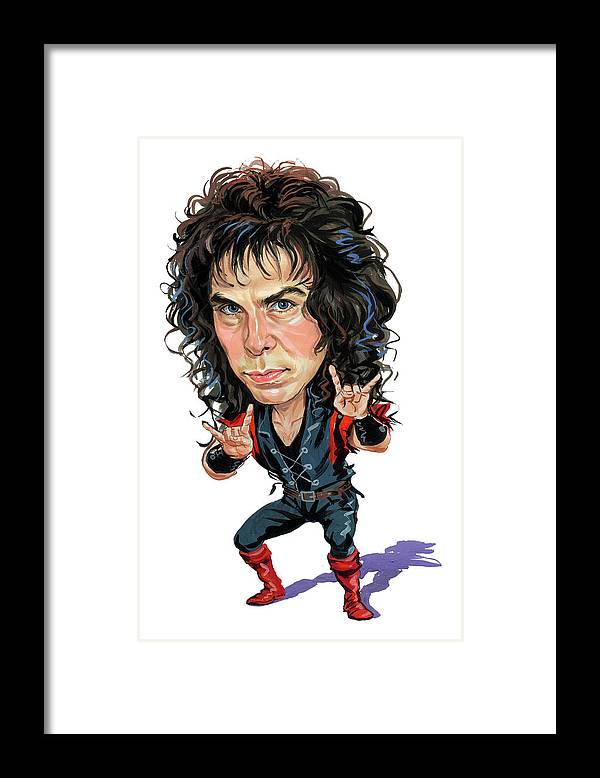 Ronnie James Dio framed print by Art .   Bring your print to life with hundreds of different frame and mat combinations. Our framed prints are assembled, packaged, and shipped by our expert framing staff and delivered "ready to hang" with pre-attached hanging wire, mounting hooks, and nails.

Nice job! Keep up the good work! You inspire me. Have to put more thoughts into my artwork :)

Art is the stored honey of the human soul, gathered on wings of misery and travail." -- Congratulations on your recent sale of this amazing Work!

I love Steve Henderson art work!!! I used to have a gorgeous watercolor of this girl looking out a window. I would love to have that painting again but can't find it anywhere. But I will continue to order Steve Henderson for my home.

We love this print! It looks great.

Having never purchased from this website, I was uncertain about how good the quality would be. I was not disappointed. Very high resolution. Nicely framed. High quality all around.

I love the art print itself. The protective piece covering the art work is not glass but some type of plastic. There was a nice message on how to care for this plastic so it doesn't receive any scratches. The problem was it was delivered with a nick in the plastic. I am not happy with quality of the product. I haven't contacted the company to see if they will do anything about it.

Anything I purchase from Fine Art America is always of the highest quality! I was so impressed with this purchase, it’s incredibly special and will be a staple in our household for many years to come.

Love it, looks great with the other one we ordered in sons room

Ronald James Padavona (July 10, 1942 - May 16, 2010), better known as Ronnie James Dio, was an American heavy metal vocalist and songwriter. He performed with, amongst others, Elf, Rainbow, Black Sabbath, Heaven & Hell, and his own band Dio. Other musical projects include the collective fundraiser Hear 'n Aid. He was widely hailed as one of the most powerful singers in heavy metal, renowned for his consistently powerful voice. He often ranks as one of the greatest rock vocalists of all time in various online polls and lists. He is credited with popularizing the "metal horns" hand gesture in metal culture. Prior to his death, he was collaborating on a project with former Black Sabbath bandmates Tony Iommi, Geezer Butler, and Vinny Appice, under the moniker Heaven & Hell, whose only studio album, The Devil You Know, was released on April 28, 2009. Dio died of stomach cancer on May 16, 2010. One of the last songs he recorded was titled "Metal Will Never Die". Source: Wikipedia.org

Our goal is artwork that will generate some smiles & laughter. We hope to bring you new art for eternity. Thanks for your support and God Bless!