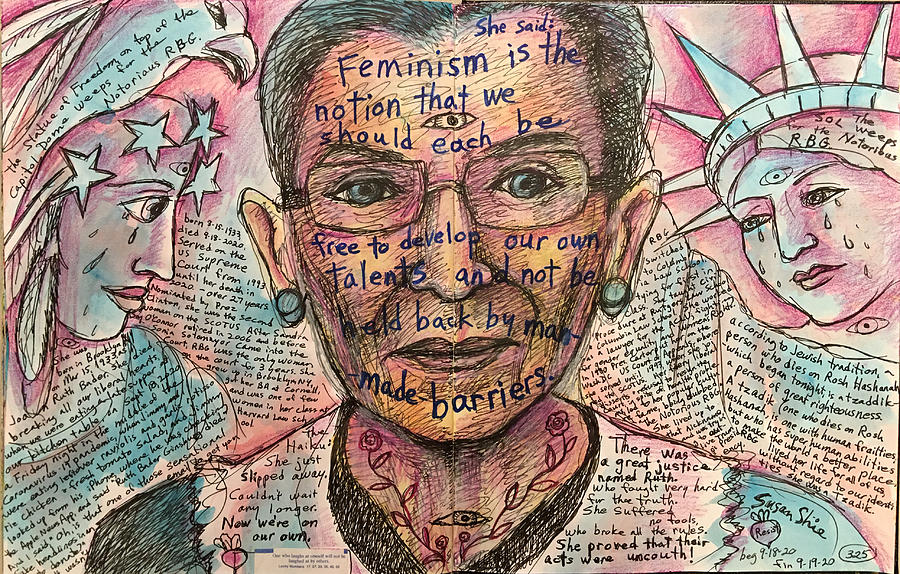 Ruth Leaves Us Haiku is a drawing by Susan Shie which was uploaded on September 24th, 2020.

1 “Ruth Leaves Us Haiku.” Finished 9-19-20
14”h x 22”w mixed media drawing in hardbound sketchbook. Ruth Bader Ginsburg died on 9-18-20 at 87, serving 27 years on the Supreme Court, and dying while still on the Court. Before that, she represented the ACLU, bringing many cases to the SCOTUS, and winning many rights for women and other minorities.
She died of pancreatic cancer, after a very long struggle to stay healthy and serving on the Supreme Court as long as she could. In my drawing here, the Statue of Freedom, on top of the Washington DC Capitol Dome, and the Statue of Liberty in New York Harbor, weep for their mighty Sister of Mercy. This is my tribute to Ruth Bader Ginsburg.
In the end, I was going to just draw some of my Peace Roses on her neck and face. You know, as her tattoos. But then, after I drew roses on her neck, I decided her face tattoo would be one of her quotes.
The haiku I wrote on our left side of her collar, says:
"She just slipped away.
Couldn't wait any longer.
Now we're on our own."
And the limerick I wrote on our right side of her collar says:
There was a great justice named Ruth.
Who fought very hard for the truth.
She suffered no fools
Who broke all the rules.
She proved that their acts were uncouth!"
The fortune says:
"One who laughs at oneself will not be laughed at by others."
I drew this freehand with my black gel pen, then colored it with Prang watercolors, adding color pencil stix shading.
The world has a huge gap now, where this trailblazing woman stood, fighting for women’s rights and justice for all minorities.
Our hearts are broken that RBG is gone now, but we must carry on her relentless fight to protect the rights of all who should hae equality in the world, but often don’t.
RIP, RBG!