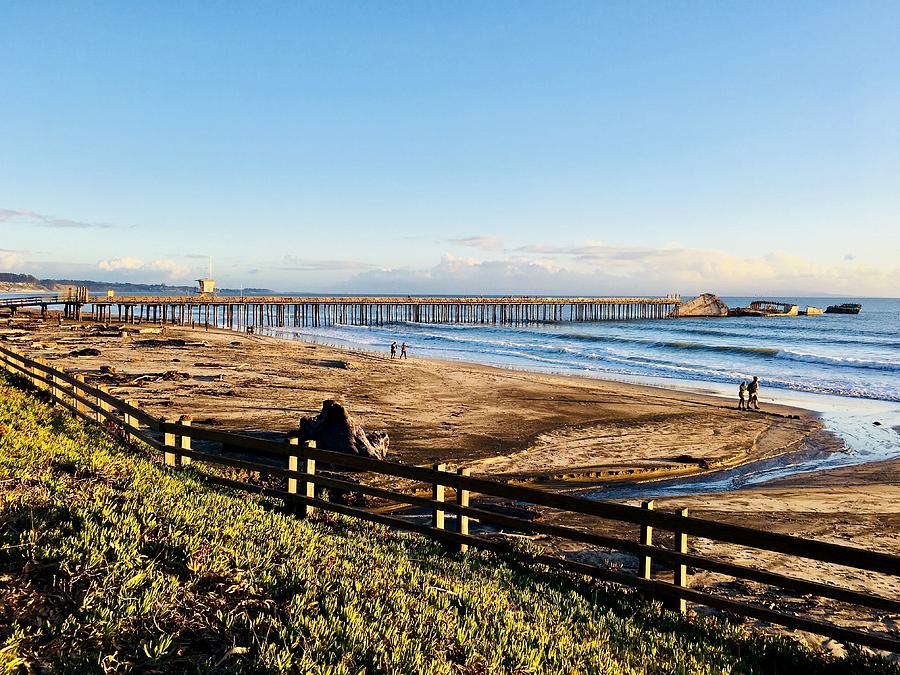 S. S. Palo Alto - Cement Ship is a photograph by Christina Ford which was uploaded on December 2nd, 2018.

History of Seacliff Cement Ship: by Fleur Williams on January 29, 2017

One of the most remarkable landmarks along the Santa Cruz coastline is the S. S. Palo Alto, more traditionally known as the old “cement ship”. Lodged at the end of the Seacliff State Beach fishing pier in Aptos, the ship remains a nostalgic symbol of local life and activities from the past.

Long before the waves and winter storms cracked the hull and sunk the ship into the sand, the S. S. Palo Alto was a 435-foot long, 7,500-ton oil tanker built for use during World War I. When the U.S. government commissioned new ships to replace those destroyed by German submarines, the U.S. Shipping Board Emergency Fleet Corporation built ships from reinforced concrete, using technology developed by a Norwegian civil engineer, Nicolay Knudtzon Fougner, and his brother Hermann.

In 1919, the Palo Alto was constructed along with a sister ship, the Peralta, at the U.S. Naval Shipyard in Oakland, by the San Francisco Shipbuilding Company. The cement used for building the ship’s thin concrete hull came from Davenport, and it is thought that some of the brick used in place of gravel to lighten the weight was rubble from the San Francisco earthquake. The ship was equipped with a 2,800 horsepower steam engine, a bronze propeller, white Norwegian ash decks, and 14 compartments to hold 3 million gallons of oil.

The war ended before the Palo Alto was completed, so it was sailed from the shipyard in Oakland to be anchored at Pier 33 in San Francisco in January, 1921. Concrete ships were not popular post-war, so the Palo Alto was eventually stripped of her engine and propeller, and sold to the Seacliff Amusement Corporation in 1929. In 1930, the ship was towed to Seacliff Beach by a Red Stack tugboat, where it was beached to be refitted as a pleasure ship, and the 630 ft. fishing pier was built to connect with the ship’s stern.

Many thanks to the Buyer from Capitola, California!