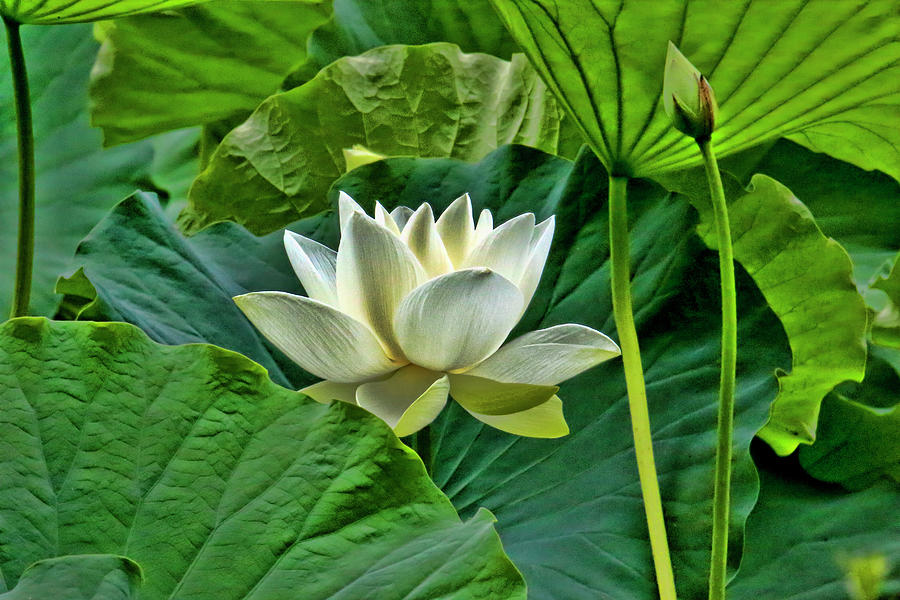 Sacred Lotus Floral Capture is a photograph by Geraldine Scull which was uploaded on July 21st, 2018.

Nelumbo nucifera, also known as Indian lotus, sacred lotus, bean of India, Egyptian bean or simply lotus, is one of two extant species of aquatic plant in the family Nelumbonaceae. It is often colloquially called a water lily. Under favorable circumstances the seeds of this aquatic perennial may remain viable for many years, with the oldest recorded lotus germination being from that of seeds 1,300 years old recovered from a dry lakebed in northeastern China.[1]

It has a very wide native distribution, ranging from central and northern India (at altitudes up to 1,400 m or 4,600 ft in the southern Himalayas[2]), through northern Indochina and East Asia (north to the Amur region; the Russian populations have sometimes been referred to as "Nelumbo komarovii"), with isolated locations at the Caspian Sea.[3] Today the species also occurs in southern India, Sri Lanka, virtually all of Southeast Asia, New Guinea and northern and eastern Australia, but this is probably the result of human translocations.[3] It has a very long history (c. 3,000 years) of being cultivated for its edible seeds,[3] and it is commonly cultivated in water gardens.[2] It is the national flower of India and Vietnam.WIKIPEDIA

This perennial plant is an emergent aquatic that produces individual leaves and flowers directly from the root system. The blades of the leaves either float on the surface of the water, or they are held up to 5' above the water surface by their petioles (often the latter). These circular peltate blades are 1½-3' across, medium green or blue-green, and hairless. Their margins are smooth, often undulating up and down. Each leaf blade above the water surface is depressed toward the middle where it is joined by the petiole. Many veins radiate from its center in all directions; these veins become forked as they approach the outer margin of the blade. The stout petioles are light green, terete, hairless, and either smooth or somewhat prickly. The interior of each petiole contains hollow chambers that keep the petiole erect and convey oxygen to the root system. WIKIPEDIA

FEATURED ON THE HOME PAGE OF :

** YOUR STORY OF ART

** FLOWERS FROM OUR GARDENS

** IMAGES THAT EXCITE YOU

** VISIONS OF SPRING - GLANCES OF SUMMER

CONGRATULATIONS on your feature in Beautiful Flowers Group...L

Congratulations! Your fantastic photographic art has been chosen as a Camera Art Group feature! You are invited to archive your work in the feature archives discussion in the Camera Art Group.

Thank you very much John !

Thank you very much Asbed ~ !

Geri, love how this one seems to glow from the center and everything around it thinks it is sacred. f/l

Thank you very much Cindy !

Thank you very much Marv !

Love the LOTUS the way you have presented! L/F

Thank you very much Anand !

Thank you very much Karol ~

Thank you very much Cindy !~