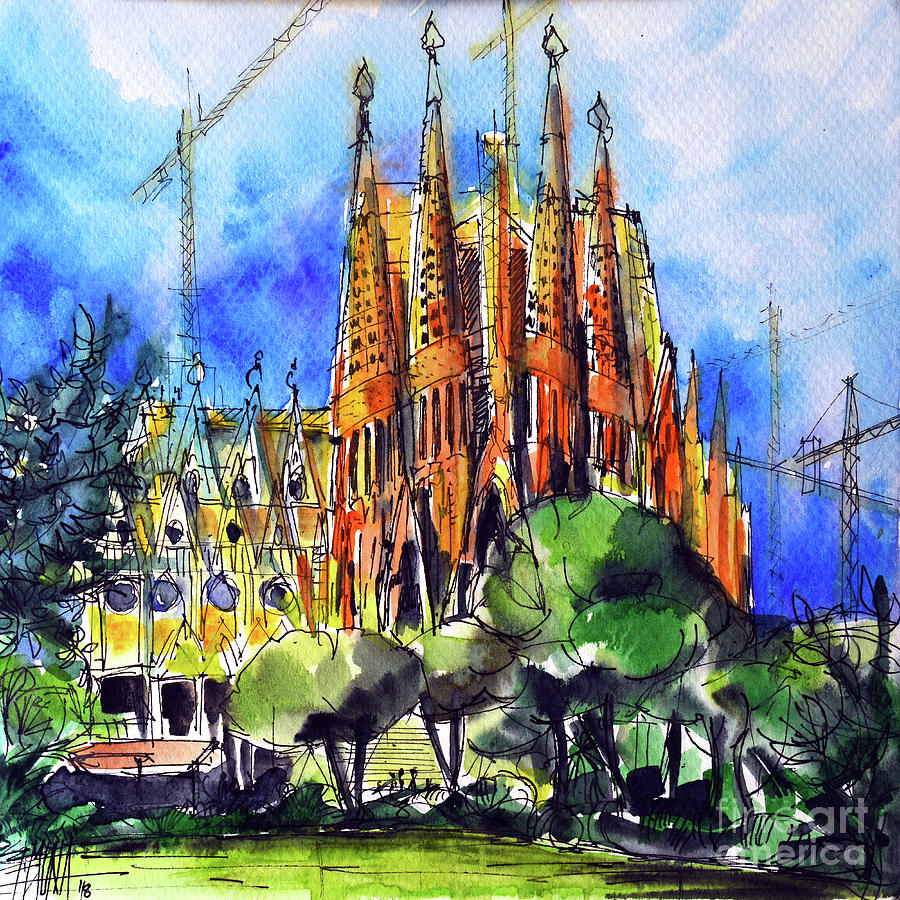 "Sagrada Familia Barcelona" Original watercolor painting on a high quality 300 g/m - 140lb Acid Free Arches watercolor paper 20x20 cm (8x8 in), 2018.
Painting inspired by my travels to Barcelona.
-----------------------
Describing Sagrada Familia, art critic Rainer Zerbst said, "It is probably impossible to find a church building anything like it in the entire history of art" and Paul Goldberger called it, "The most extraordinary personal interpretation of Gothic architecture since the Middle Ages."
-----------------------
The Basilica i Temple Expiatori de la Sagrada Familia (Basilica and Expiatory Church of the Holy Family) is a large Roman Catholic church in Barcelona, Catalonia (Spain), designed by Catalan architect Antoni Gaudi (1852-1926). Although incomplete, the church is a UNESCO World Heritage Site and in November 2010 Pope Benedict XVI consecrated and proclaimed it a minor basilica, as distinct from a cathedral, which must be the seat of a bishop.
Construction of Sagrada Familia had commenced in 1882 and Gaudi became involved in 1883, taking over the project and transforming it with his architectural and engineering style, combining Gothic and curvilinear Art Nouveau forms. Gaudi devoted his last years to the project, and at the time of his death at age 73 in 1926, less than a quarter of the project was complete. Sagrada Familia's construction progressed slowly, as it relied on private donations and was interrupted by the Spanish Civil War, only to resume intermittent progress in the 1950s. Construction passed the midpoint in 2010 with some of the project's greatest challenges remaining and an anticipated completion date of 2026, the centenary of Gaudi's death. (source: Wikipedia)

THANK YOU to the buyer from Roseville, CA - United States for purchasing a print of my SAGRADA FAMILIA BARCELONA watercolor painting! I hope you will enjoy it for many years to come!

THANK YOU to the buyer from Princeton, NJ - United States for purchasing a lovely print of my Sagrada Familia BARCELONA watercolor painting! I hope you will enjoy it for many years to come!

Thank you to the buyer from Albemarle, NC - United States for purchasing a greeting card of this painting of mine!

Thank you to the buyer from Denver, CO - United States for purchasing a lovely print of my Watercolor painting of Sagrada Familia Barcelona!

congratulation on your sale

This is so beautiful watercolor painting, Mona. FL

Congratulations Mona, your outstanding artwork has been featured on the leading page of “Impressionism” group! Feel free to add it to the featured art archive and the catalogs in the group’s discussions. Stunning watercolort work! Lori

Such a marvelous free flowing style for a painting of the Sagrada Familia Mona! You are such a master of depicting architecture , no matter what medium you choose! I so love your spontaneity which is perfectly articulated in watercolor! It has delighted me over the last few years to paint this wonderful building, originally from a requested commission which I wished at the time to turn down and now I'm so glad I did not! Now I'm inspired all over again by your wonderful expression! L/F

CONGRATULATIONS!! Your beautiful artwork has been Featured by the - SQUARE ART WORLD - Artist Group on Fine Art America / PIXELS! Thank you for sharing it!!! https://tinyurl.com/SquareArtWorld

This is such a dynamic watercolor painting, Mona! I am drawn in by your choice of vibrant colors and the way you are suggesting architectural details so freely. l/f

My today feature and favorite on WP group. Shared on Facebook. Great artwork as always with you!

What a Beautiful Image and a masters Touch, MonA!

Beautiful dynamic sense of flow and movement in this scene, Mona.