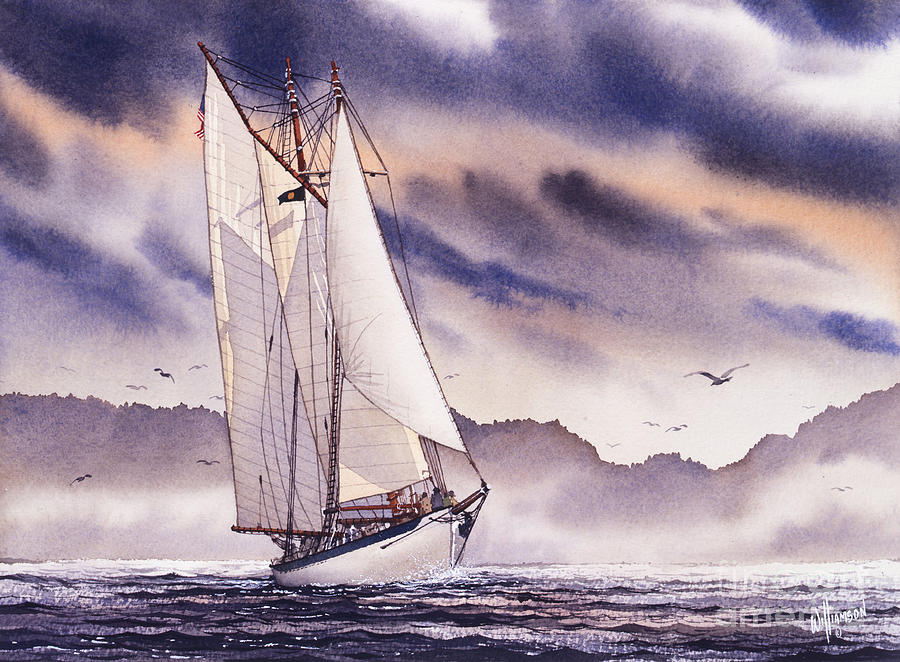 Sailing Adventure is a painting by James Williamson which was uploaded on January 10th, 2012.

Schooner ZODIAC
An original watercolor painting by artist James Williamson recreated as a fine art image and greeting card by Fine Art America.
Schooner: A fore and aft rigged vessel of any practical number of masts above one, seven being the largest number ever used. Zodiac: Circle; Circle of animals; 1. An imaginary belt in the heavens extending for about eight degrees on either side of the apparent path of the sun and including the paths of the moon and the principle planets; it is divided into twelve equal parts, or signs, each named for a different constellation. 2. A figure or diagram representing the zodiac and its signs: used in astrology 3. A circle or circuit.
Historic Schooner Zodiac Built in 1924 for the heirs to the Johnson & Johnson pharmaceuticals fortune, the two-masted schooner Zodiac has been based in Seattle since the early 1990�s. She is the largest wooden sailing vessel continuing to work on the West Coast of the United States. The Zodiac is presently operated by the non-profit Northwest Schooner Society for Elderhostel and youth training cruises, group charters, and day-sail excursions throughout Puget Sound, the San Juan Islands, and Northwest waters. The vessel is currently berthed at the Alaska Ferry Terminal, which is located near the Fairhaven district in South Bellingham, Washington. She is prepared for cruises at this location and is a frequent sight on Bellingham Bay during the sailing season.
The Zodiac is a two-masted schooner weighing 145 gross tons with a deck measuring 127 feet from bow to stern with a beam of 25.5 feet. The ship sets over 7,000 square-foot of sail, all hoisted by hand, including the 4,000 square feet of canvas on her mainsail. The mainmast is over 100 feet high. Commissioned as a yacht for Robert Wood and J. Seward Johnson, she was designed by legendary naval architect William Hand Jr. on the model of a �racing fisherman� schooner popular in the Atlantic cod fishery during the early 1900�s. The Zodiac was built with painstaking care with everything top-of-the-line and state-of-the-art at the Hodgson Brothers Shipyard in East Boothbay, Maine. Designed as an ocean racing yacht, she was entered in the 1928 Trans-Atlantic Race from New York to Spain. A stout ship, Zodiac finished fourth due to light winds.
When the Depression hit, the Johnson�s lost interest in Zodiac and put her up for sale in 1931. This magnificent schooner, for which the Johnson�s had paid $150,000 in 1924, was sold to the San Francisco Bar Pilots for $15,000 � 10 cents on the dollar. The Bar Pilots renamed the ship California, and she served faithfully under this name for 41 years, transferring pilots to and from large ships as they navigated the treacherous waters off San Francisco bay. California was retired in 1972 � the last pilot schooner in the United States. She was then purchased by a couple that moved her to Newport, Oregon, for rehabilitation as a sailing yacht. When this proved too daunting, the owners donated her to Karl Mehrer, a veteran seaman and then master of the Adventuress, another vintage schooner that had seen duty as a San Francisco pilot boat.
Mehrer organized The Vessel Zodiac Corp. with his son Tim and wife June in the late 1970�s to rebuild and sail her as a charter and training vessel. They moved her to Seattle and began a 15-year labor of love to reclaim her former majestic glory. The vessel was listed on the National Register of Historic Places in 1982, and her original name was restored in 1984 on the 60th anniversary of her launching.
As the Mehrers and scores of volunteers� neared completion of the Zodiac�s reconstruction, they discovered that federal law prohibited Coast Guard certification of wooden vessels of over 100 gross tons. Seattle attorney Tom Johnson recruited the aid of U.S. Rep. John Miller, who charted a course that led to a special Congressional waiver for the Zodiac in the early 1990�s.
The Zodiac has been operated by the non-profit Northwest Schooner Society since 1994, and is at times berthed at a north Lake Union pier donated by King County. She can accommodate up to 49 passengers for day sails and sleep 24 guests willing to help man the sails and swab the decks.
A national maritime treasure 77-years young, she is now straining at her mooring lines, beckoning you to sail her on your own voyage. On a tilted wooden deck, sails cracking overhead, let Zodiac transport you back to an age of wonder and romance of the sea. Cast off your lines and set your compass. The wind will never feel the same after this salt spray adventure.
Heavy weather or sunshine � ZODIAC handles it all with ease � Come sail with us!