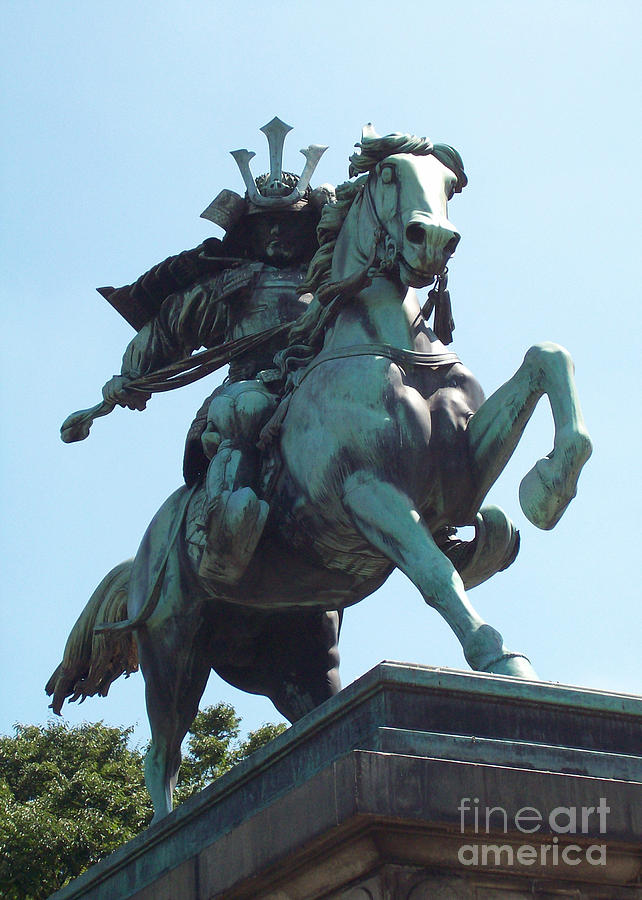 Samurai is a photograph by Cheryl McClure which was uploaded on August 23rd, 2012.

In my visit to Tokyo, Japan, this striking statue was another beautiful sight to see in the city. Kusunoki Masashige (楠木... more

In my visit to Tokyo, Japan, this striking statue was another beautiful sight to see in the city. Kusunoki Masashige (楠木 正成, 1294 - July 4, 1336) was a 14th century samurai who fought for Emperor Go-Daigo in his attempt to wrest rulership of Japan away from the Kamakura shogunate and is remembered as the ideal of samurai loyalty. His origin has not been validated and it was merely six years between the start of his military campaign in 1331 and his demise in 1336. He received the highest decoration from the Meiji government of Japan in 1880.

A brilliant tactician and strategist, Kusunoki's cunning defense of two key Loyalist fortresses at Akasaka and Chihaya helped allow Go-Daigo to briefly return to power. However, one of the loyalist generals, Ashikaga Takauji, betrayed Go-Daigo and led an army against Kusunoki and the remaining loyalists. Kusunoki suggested to the Emperor that they take refuge on sacred Mount Hiei and allow Takauji to take Kyoto, only to swoop down from the mountain, and with the help of the monks of Mount Hiei, trap Takauji in the city and destroy him.

Go-Daigo was unwilling to leave the capital however, and insisted that Kusunoki meet Takauji's superior forces in the field in a pitched battle. Kusunoki, in what would later be viewed as the ultimate act of samurai loyalty, obediently accepted his Emperor's foolish command, left his death poem with his young son Masatsura and knowingly marched his army into almost certain death. The battle, which took place at Minatogawa in modern-day Chūō-ku, Kobe, was a tactical disaster. Kusunoki, his army completely surrounded, down to only 73 of the original 700 horsemen, died from wounds sustained in battle along with his brother Masasue, 11 close clan members, and 60 others. According to legend, his brother's last words were Shichisei Hōkoku! (七生報國; "Would that I had seven lives to give for my emperor!") and Kusunoki Masashige agreed. There are two accounts of arguments that Kusunoki Masashige made to emperor Go-Daigo. One was that they regroup and attack from two sides, the other was that they bring back general Takauji to their side thus balancing the scales. Both arguments were ignored.