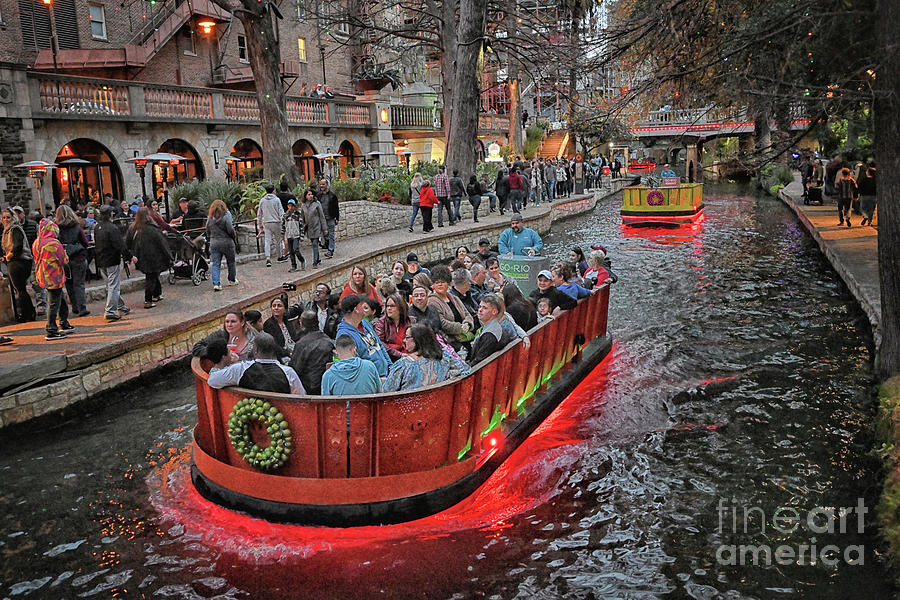 San Antonio River Walk at Christmas is a photograph by Norman Gabitzsch which was uploaded on January 6th, 2020.

The San Antonio River Walk (also known as Paseo del Río or simply as The River Walk) is a city park and network of walkways along the banks of the... more

The San Antonio River Walk (also known as Paseo del Río or simply as The River Walk) is a city park and network of walkways along the banks of the San Antonio River, one story beneath the streets of San Antonio, Texas, United States. Lined by bars, shops, restaurants, nature, public artwork, and the five historic missions, the River Walk is an important part of the city's urban fabric and a tourist attraction in its own right. The River Walk is a successful special-case pedestrian street, one level down from the automobile street. The River Walk winds and loops under bridges as two parallel sidewalks lined with restaurants and shops, connecting the major tourist draws from the Shops at Rivercenter, to the Arneson River Theatre, to Marriage Island, to La Villita, to HemisFair Park, to the Tower Life Building, to the San Antonio Museum of Art, to the Pearl and the city's five Spanish colonial missions, which have been named a World Heritage Site, including the Alamo. During the annual springtime Fiesta San Antonio, the River Parade features flowery floats that float down the river.

San Antonio officially the City of San Antonio, is the seventh-most populous city in the United States, and the second-most populous city in both Texas and the Southern United States, with more than 1.5 million residents. Founded as a Spanish mission and colonial outpost in 1718, the city became the first chartered civil settlement in present-day Texas in 1731. The area was still part of the Spanish Empire, and later of the Mexican Republic. It is the state's oldest municipality, having celebrated its 300th anniversary on May 1, 2018

Photograph made with an infrared converted Nikon Z7.

Ad Some Punch & Light It Up, Along With a Great Photographer Behind the Lens and You Have Got an Outstanding Photograph!!!

Congratulations - Your beautiful artwork has been featured in the "Travel Art" group! For further promotion, you can post it to the specific Travel Destinations galleries, our Facebook group and our Pinterest board - all the links are provided on our group's homepage: https://fineartamerica.com/groups/1-travel-art.html * * Want to be on our group's blog: travelartpix.com? Check the group's homepage for details!

Fantastic, I was there last Feb,,

Linda ... It's a beautiful place in the winter. Glad you enjoyed San Antonio.