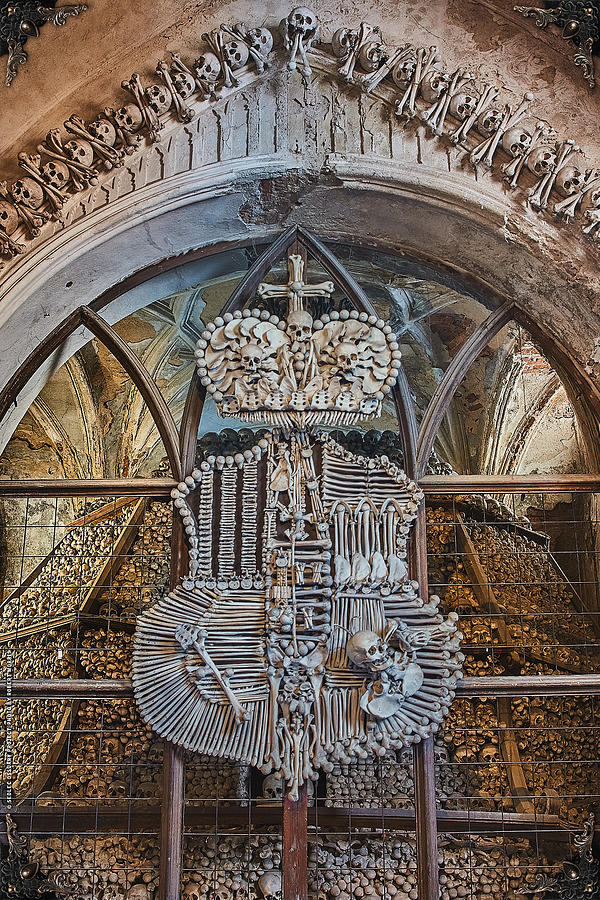 Sedlec Ossuary Coat Of Arms Photo Art Print, Bone Church is a photograph by Sedlec Ossuary Project which was uploaded on January 18th, 2020.

This is a professionally shot photograph taken inside the world famous bone church of Sedlec Ossuary in Kutna Hora, Czech Republic (taken with... more

This is a professionally shot photograph taken inside the world famous bone church of Sedlec Ossuary in Kutna Hora, Czech Republic (taken with permission from the Roman Catholic Parish of Kutna Hora).

A portion of the proceeds from the sale of these prints will be donated to the Roman Catholic Parish of Kutná Hora-Sedlec, for the restoration efforts and preservation of the future of Sedlec Ossuary.

The Sedlec Ossuary is a small Roman Catholic chapel, located beneath the Cemetery Church of All Saints, part of the former Sedlec Abbey in Sedlec, a suburb of Kutná Hora in the Czech Republic. The ossuary is estimated to contain the skeletons of between 40,000 and 70,000 people, whose bones have, in many cases, been artistically arranged to form decorations and furnishings for the chapel, including an enormous chandelier of bones, which contains at least one of every bone in the human body, and hangs from the center of the nave with garlands of skulls draping the vault. In 1995, the Sedlec Ossuary and the Historical Town Centre of Kutna Hora were listed as a UNESCO World Heritage Site.

The Sedlec Ossuary Project is a passion project dedicated to preserving the history and unique artistic inspiration of this incredible chapel.