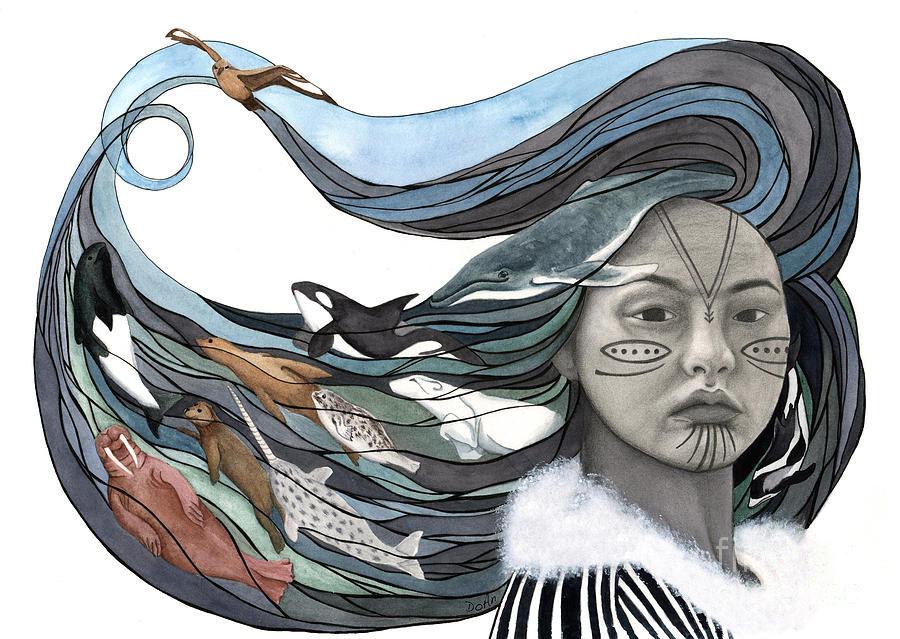 Sedna is a painting by Antony Galbraith which was uploaded on April 11th, 2015.

Sedna, goddess of the arctic sea, controls the sea mammals and the balance of life and death in the cold north. Her transformation from beautiful... more

Sedna, goddess of the arctic sea, controls the sea mammals and the balance of life and death in the cold north. Her transformation from beautiful young woman to a hag-like goddess is told in many conflicting tales throughout the Arctic peoples. I have put together a condensed version here:

Sedna began as a beautiful young woman, courted by many suitors, but none pleased her father. Then a mysterious stranger appeared, claiming to be a great king in the north, and convinced her father to let them marry. Sedna went to live with her new husband only to discover that he was a cruel Skua (sometimes it is a Raven) in disguise. She called for help from her father who came to her aid and as they escaped in a small canoe, the angry Skua sent a terrible storm to topple them. Sedna fell into the water and clung to the side of the canoe to keep from drowning. Her father, fearing that they might both die, cut her fingers off so she sank down into the icy depths. As she sank, her severed fingers became seals, walruses, porpoises, dolphins, polar bears, whales, and sea otters. She became an important figure for the hunters of the north who relied on her generosity to survive. If Sedna felt slighted, she would call her sea animals to her and the people would starve.

Congratulations on your sale Antony!

It's such a great feeling to sell something, Congratulations on your sale.

Yes, I am the artist of this piece.

Are you the artist of this piece of work? I have read elsewhere that Sedna is the artwork of Germaine Arnaktauyuk of Iglooloik.

Congratulation on your recent sale!!

This is beautiful and so well done. Your use of, colour, light to dark, and shapes, create a lot of excitement. Your choice of lines to create a sense of motion was very masterful. The mood created by her expression really adds to the image. Your choice of ingredients and the number of them used has worked well for you here and I see no conflicts. if I was doing an actual mini-analysis for you I would make a couple suggestions for next time. This is a quality art piece.