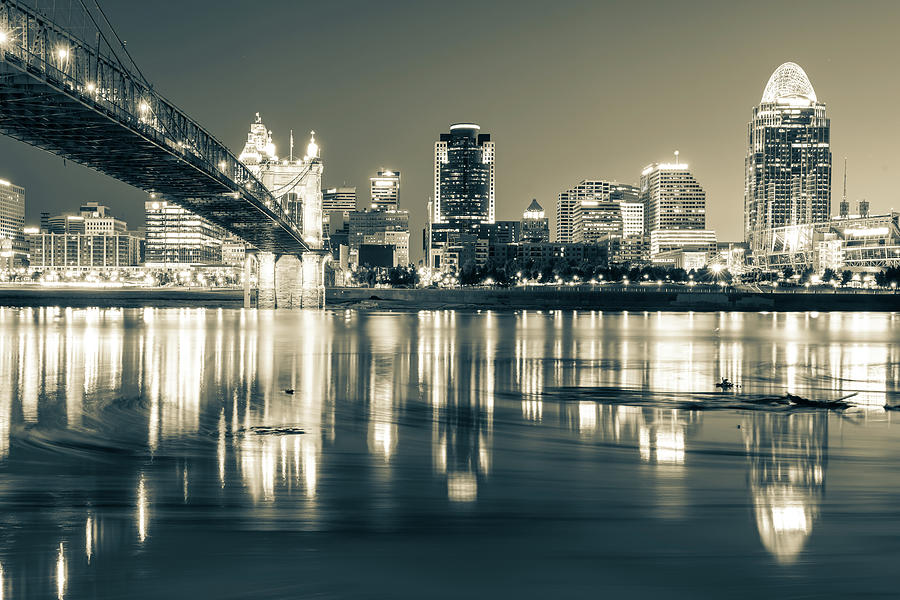 Sepia Toned Cincinnati Ohio River Skyline is a photograph by Gregory Ballos which was uploaded on August 17th, 2017.

ABOUT THE CINCINNATI RIVERFRONT: Being... more

ABOUT THE CINCINNATI RIVERFRONT: Being situated on the Ohio River, Cincinnati is home to several prominent bridges that connect the downtown to Covington, Kentucky and Newport, Kentucky. In fact, there are more bridges that cross the Ohio River in Cincinnati than at any other place on the River. These bridges include the historic and picturesque John A. Roebling Suspension Bridge, which served as a prototype for the Brooklyn Bridge; the Daniel Carter Beard Bridge (aka The Big Mac Bridge); and the Newport Southbank Bridge (sometimes referred to as the Purple People Bridge), which is the longest pedestrian-only bridge in the United States connecting two states.

Cincinnatians place a great value on the riverfront for its entertainment and economic benefits. The riverfront is home to both Paul Brown Stadium home of the Cincinnati Bengals, and to Great American Ball Park home of the Cincinnati Reds, as well as to the National Underground Railroad Freedom Center. "The Banks", a 40-acre site planned for future mixed commercial, residential and public recreational use is also on the riverfront. The annual WEBN Fireworks on Labor Day are celebrated at the river, as is Tall Stacks, the largest gathering of steam riverboats in the nation. Many cultural festivals are held at Sawyer Point, including the Cincy Blues Fest and the Cincinnati Celtic Festival, formerly held at Ault Park. Coney Island is on the river several miles east (up-river) from the Downtown area.