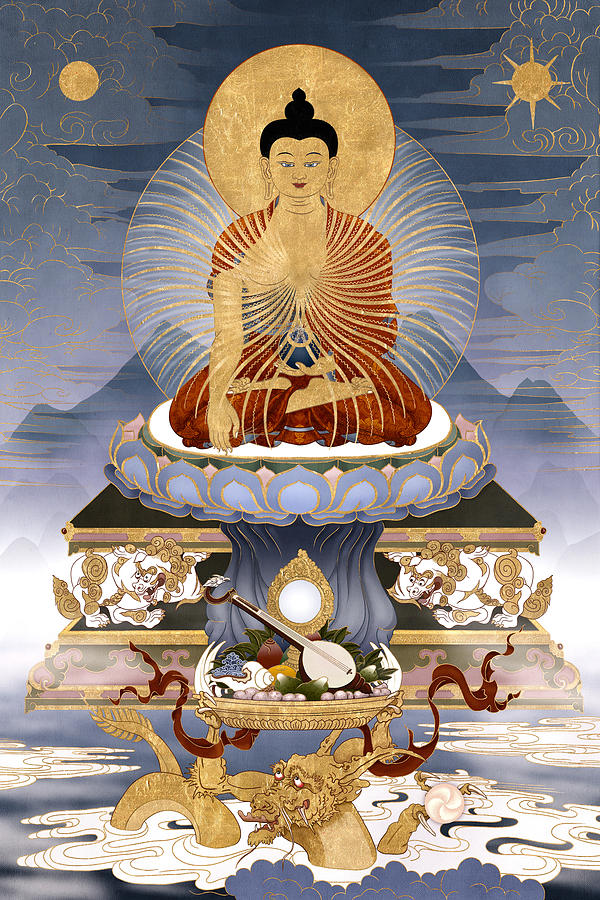 Shakyamuni Buddha - The Dragons Story is a painting by Ben Christian which was uploaded on March 7th, 2014.

In this image Shakyamuni Buddha is shown high above a distant mountain range, seated upon a throne of a lotus with sun and moon cushions, supported... more

In this image Shakyamuni Buddha is shown high above a distant mountain range, seated upon a throne of a lotus with sun and moon cushions, supported by eight great lions.
The elements of the lotus, moon and sun represent the Three Principal Paths of Buddhism, namely renunciation, the wish for enlightenment, and correct view of emptiness. Each of these paths have been perfectly elucidated by Je Tsongkapa in his Lam Rim text of the same title: The Three Principal Paths. Here though - in this image - the narrative is primarily concerned with the fist of the three, renunciation.

Below the main figure of Shakyamuni Buddha, we see a celestial dragon presenting beautiful offerings; holding them up reverently to the enlightened one. He has gathered together the finest of gifts in order to request the Buddha to be his teacher. In his hands he holds a golden bowl filled with offerings to delight each of the senses. Tentatively through the clouds his hind leg is outstretched, in its grasp he offers his most precious possession; the flaming pearl. Chinese mythology describes how the dragons spend their entire lives coveting and searching for such a pearl. Here the flaming pearl is drawn in the style of a bliss swirl. This is to show that the dragon, who is ruler of the realm of sky, is willing to forsake his worldly happiness and possessions in order to become a disciple of the Buddha.

Some of us might feel fear when we think of giving up our most prized possessions and status to begin a spiritual path. We should not fear, Lord Buddha Himself said:

Householders, each and every one,
May plow their crops on a fingernail,
But those who have left their homes for me
Will never want for necessities.

His Holiness the First Panchen Lama spoke these words of devotion to Lord Buddha, encapsulating the dragons wish:

I beg that you grant me
virtue and goodness,
Lama of the Gods,
Lord of the Able.
Let me rest my forehead awhile
upon those tiny rising moons,
the toenails of your feet,
a lovely string of priceless jewels,
a fitting crown for all those
with delusions of worldly power.


Peeking over the summit
of the earthcore risen,
your holy body of gold,
is the magnificent orb
of your divine visage,
the daymaker;
and a smile that fills
the three realms of pain
with a thousand rays -
light, help and happiness.
Our faith lies in you,
Our Teacher.

Thanks very much Pamela, its nice of you to comment.