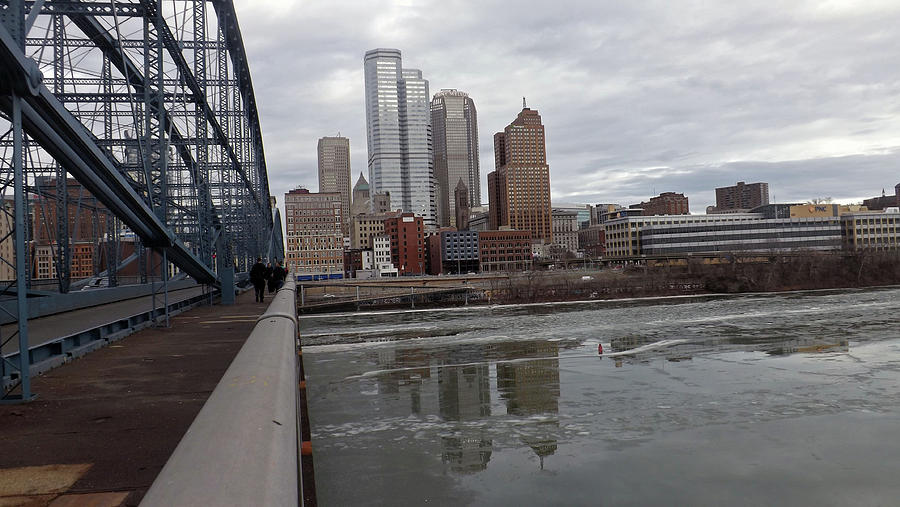 Smithfield Bridge To Downtown is a photograph by Joyce Wasser which was uploaded on January 12th, 2018.

Before cycling across the Monongahela River on the Smithfield Bridge to meet a friend I made this photograph of downtown Pittsburgh. Located at the... more

Before cycling across the Monongahela River on the Smithfield Bridge to meet a friend I made this photograph of downtown Pittsburgh. Located at the confluence of the Allegheny, Monongahela, and Ohio rivers, Pittsburgh is known as the "City of Bridges" for its 446 bridges. The city features 30 skyscrapers, two inclined railways, a pre-revolutionary fortification and the Point State Park at the confluence of the rivers. The city developed as a vital link of the Atlantic coast and Midwest, as the mineral-rich Allegheny Mountains made the area coveted by the French and British empires, Virginians, Whiskey Rebels, and Civil War raiders.

Pittsburgh has led in manufacturing of steel, aluminum, glass, shipbuilding, petroleum, foods, sports, transportation, computing, autos, and electronics. For part of the 20th century, Pittsburgh was behind only New York and Chicago in corporate headquarters employment; it had the most U.S. stockholders per capita. America's 1980s deindustrialization laid off area blue-collar workers and thousands of downtown white-collar workers when the longtime Pittsburgh-based world headquarters moved out.This heritage left the area with renowned museums, medical centers, parks, research centers, libraries, a diverse cultural district and the most bars per capita in the U.S.