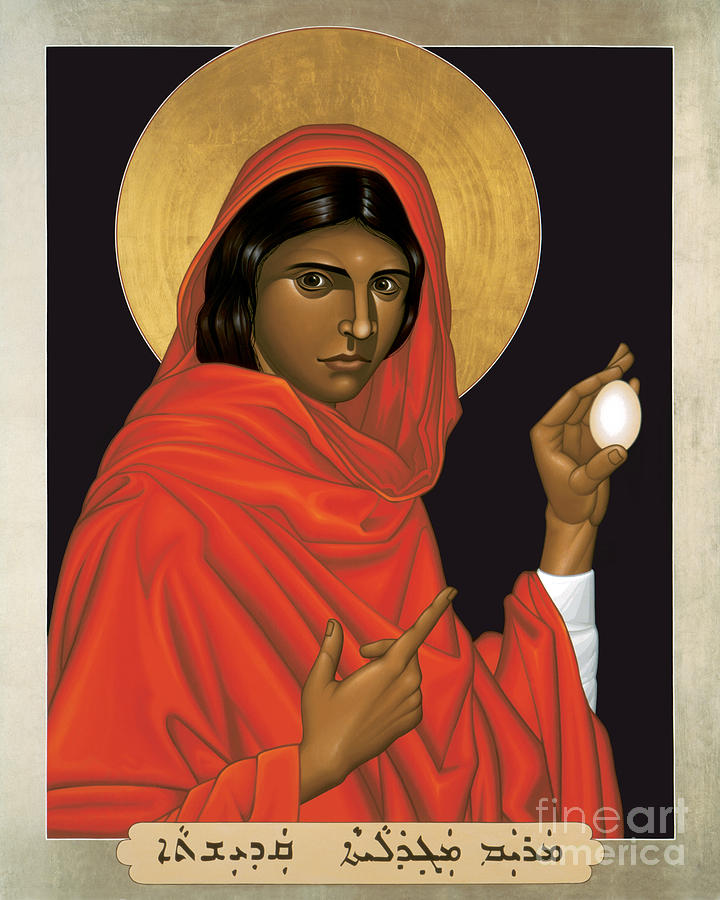 St. Mary Magdalene - RLMAM is a painting by Br Robert Lentz OFM which was uploaded on March 6th, 2016.

The fine art america Watermark Does Not Appear On Your Final Products. ... more

The "fine art america" Watermark Does Not Appear On Your Final Products.

According to the ancient tradition of the East, Mary Magdalene was a wealthy woman from whom Christ expelled seven "demons." During the three years of Jesus’ ministry, she helped support Him and His other disciples with her money. When almost everyone else fled, she stayed with Him at the cross. On Easter morning she was the first to bear witness to His resurrection. She is called "Equal to the Apostles."

After the Ascension, she journeyed to Rome where she was admitted to Tiberias Caesar's court because of her high social standing. After describing how poorly Pilate had administered justice at Jesus’ trial, she told Caesar that Jesus had risen from the dead. To help explain the resurrection, she picked up an egg from the dinner table. Caesar responded that a human being could no more rise from the dead than the egg in her hand turn red. The egg turned red immediately, which is why red eggs have been exchanged at Easter for centuries in the Byzantine East.

Mary did not end her days as a penitent hermit in a French cave. She traveled the Mediterranean preaching the resurrection. Like Peter and Paul, she died a martyr and she bears witness to the important roles women play in the Church. This icon was commissioned for Grace Cathedral in San Francisco to commemorate the election of Barbara Harris, the first woman bishop in the Anglican communion. As women begin reclaiming their ancient rights in the Church, Mary Magdalene challenges all Christians to reexamine their cultural prejudices about sex and leadership.

The inscription at the bottom of the icon reads: "Saint Mary Magdalene" in Syriac, a dialect of the language spoken by Jesus. The Gospel comes to us, not from Rome or Greece, but from the deserts of the Middle East. We owe our faith to Semetic Christians like Mary Magdalene. With this debt in mind, we should hear her voice in Palestinian cries for justice in our day.