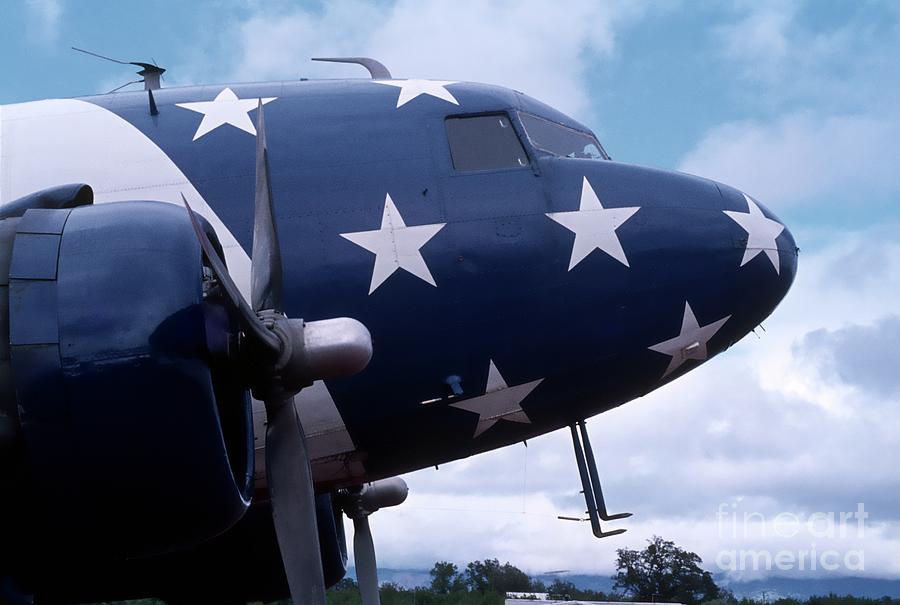 Star Spangled D C 3 is a photograph by James B Toy which was uploaded on January 28th, 2018.

NOTE: The logo watermark will not appear on purchased products.

This was the first airplane I ever photographed, at least in a serious... more

by James B Toy

Photograph - Scanned From An Agfachrome Transparency

NOTE: The logo watermark will not appear on purchased products.

This was the first airplane I ever photographed, at least in a serious fashion. It was in the spring of 1978 during the final weeks of my senior year in high school, and my mother had recently given me my first SLR, an Olympus OM-1, as an early graduation present.

I was attending a boarding school in the mountains of Lake County in California. Our school cook, Chick, was also a seasoned pilot, and one Spring afternoon he took me and my buddy John flying out of Lakeport. We had hoped to fly over the campus and get some aerial photos, but it was a bit stormy that day and the ceiling was too low to safely fly over the mountains. So instead we just flew over Clear Lake. The flight was rather bouncy, and after one go-around I'd had enough, as had the cook's wife, so we got out and let Chick and John go around a few more times without us.

A pair of DC-3s were parked at the edge of the field, so I took my camera over to check them out. One was missing its engines, but this one was intact. I walked all around it and photographed it from every angle. This shot is still my favorite. The angle was partly inspired by a scene near the beginning of the movie Close Encounters of the Third Kind wherein a WWII TBM Avenger engine is photographed at a low angle as it was started up.

The registration number for this airplane was N63250. I recently did a Google search on this plane and learned that it was owned by Trans National Airlines in Lakeport. Sadly, it crashed in the ocean en route to Hawaii in July 1979, a little over a year after I shot this image.

I shot this photograph on Agfachrome slide film mainly because, unlike other brands, the price included processing. All I needed to do was pop the film into the included mailer and drop it in the mail. It was by far the easiest way to get film developed while living far from the nearest drugstore. Although it has been in storage for the last 40 years the color has held up remarkably well, but compared to the Kodachrome slides in my collection it had quite a few blemishes which required several hours of digital clean-up work.

More from James B Toy