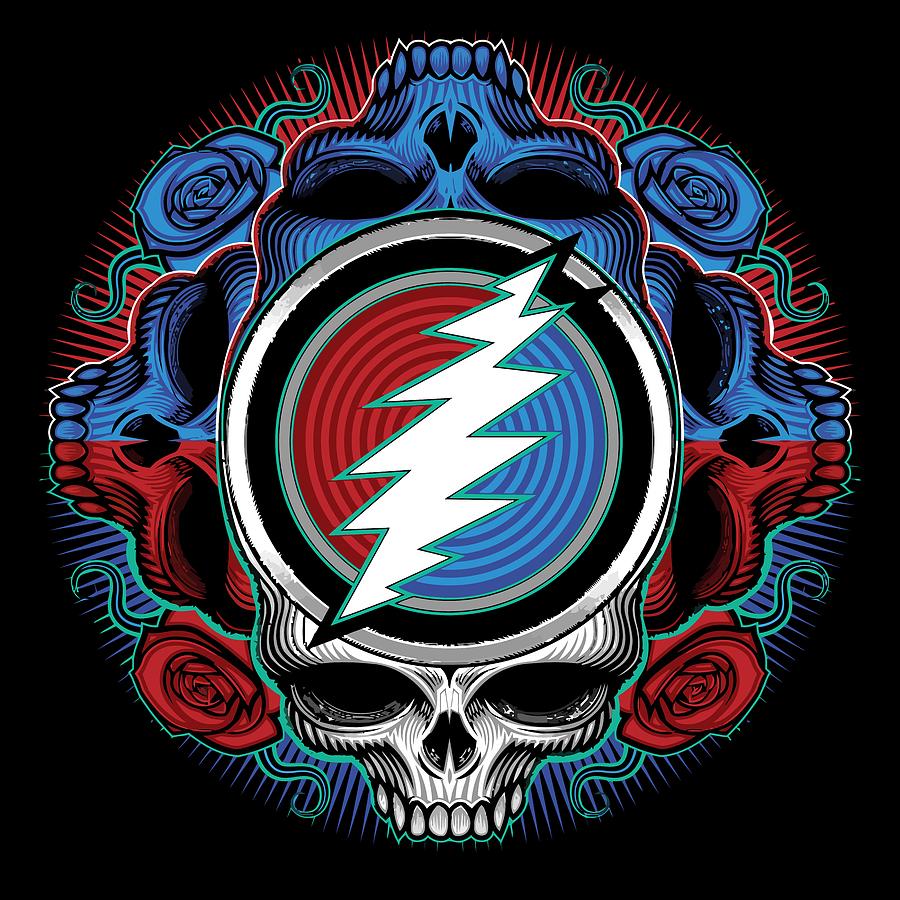 Steal Your Face - Ilustration is a piece of digital artwork by The Bear which was uploaded on May 27th, 2017.

For the next leg of our journey on our search for the meanings behind the Grateful Dead's iconic symbols, let's take a look at one of my personal... more

For the next leg of our journey on our search for the meanings behind the Grateful Dead's iconic symbols, let's take a look at one of my personal favorites: the skull and lightning bolt, or “Steal your Face” logo. This image of a skull, cracked and divided by a lightning bolt that divides the head into two hemispheres—most typically blue and red, with the lower portion of the skull in white.

Designed in 1969, the logo was the collaborative work of Owsley Stanley and artist Bob Thomas. Owsley was inspired by a freeway sign he happened to pass by—a round shape divided by a bold white line into an orange half and a blue half. The general shape and colors stood out, and Owsley had the notion that a blue and red design with a lightning bolt with make a cool logo. He shared his idea with Bob Thomas, who then drew up plans of the design.

Originally, there was no skull face—the logo was simply a circle divided with the lightning bolt. The skull face was added on a few days later, as a way to symbolize the “Grateful Dead.”

Perhaps its the lightning bolt that signifies transformation, enlightenment, and the raw powers of nature, juxtaposed with a skull image and striking, distinct colors that lends to the symbol's equation to the whole “steal your face” concept. Through the band's music and the scene and philosophy that the music inspired, people were transformed. Their everyday masks were “cracked” by the honesty, the openness and “realness” of the Grateful Dead culture, and their mundane, limited identities were left behind. The skull and lightning symbol just happens to perfectly symbolize and encapsulate this idea, even though it was created years before the song which eventually came to lend the iconic graphic it its name.

More from The Bear

Congratulations on the sale of this truly great work of art. Very cool.

Congrats on the sale

Congratulations on your sale of this magnificent artwork! F