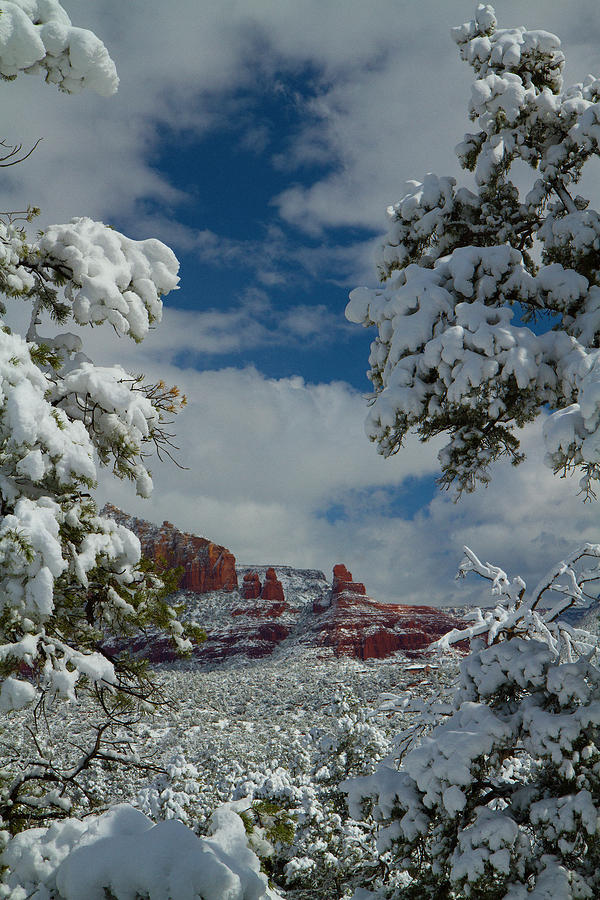 Steamboat Beckons is a photograph by Tom Kelly which was uploaded on July 7th, 2011.

8 inches of overnight snow in a surprise storm led to this beautiful image in Sedona.This was photographed mid morning as the snow was starting to... more

8 inches of overnight snow in a surprise storm led to this beautiful image in Sedona.This was photographed mid morning as the snow was starting to melt, as.the fog lifts with sun poking its sunny face out, it sure is very captivating. I have lived throughout the West for the past 40 years, but nothing tops winter hiking, sightseeing, and photography in Sedona. Lucky for us, we have several great outdoor shops and one wonderful camera store, Rollies Camera in Uptown Sedona, to cover all your needs. You can travel to West Sedona and visit, Sugarloaf, or out Dry Creek Road to numerous canyons, or go east to Bell Rock. Winter in Sedona can be a breathtaking drive in Red Rock Country. Oak Creek Canyon, located just north of Sedona in Arizona, is about 12 miles of beauty. The drive in winter has streams, and sometimes waterfalls between beautiful red rock walls full of spectacular switchbacks, and scenery that is tough to top. The depth of the Oak Creek Canyon ranges between 800 to 2000 feet. Sedona is the second most popular destination in Arizona with visitors. One look and you will understand why. The Red Rocks are serene, calling, and calming. Oak Creek, a tributary of the Verde River, flows along the bottom of the canyon, and is always flowing here in the high desert of Northern Arizona. The creek is primarily responsible for carving this majestic masterpiece of nature, although movement along the Oak Creek Fault is believed to have had a role as well. Geologic evidence suggests the formation of Oak Creek Canyon along the fault about 8 to 10 million years ago. The walls of Oak Creek Canyon, which have been eroded by wind, water, and time, are Enchanting. They are composed of Palezoic Sedimentary rocks. After the canyon was formed, it was filled in by gravel, dirt and a series of Lava flows. Sometime between 6 and 8 million years ago, the fault became active again and the canyon started to change along the fault zone. The motion resulted in the west rim being about 700 feet higher than the east rim.
At the northern end of the canyon, you can find exposures of Kaibab Limestone. The most prominent rocks at the southern end near Sedona are reddish orange to white colored. They are primarily Permian Coconino Sandstone, as well as the red sandstones of the Permian Schnebly Hill Formation. The youngest rocks are basalt lava flows which are about 6 million years old. A part of the canyon has been designated Federal wilderness area as part of the Red Rock � Secret Mountain Wilderness area. No matter what time of the year you visit Sedona, you will be mesmerized!

What a beautiful picture with great framing!

Thanks so much Nicklas!!

Cool shot Tom !! Great to see Sedona with a dusting of white !!

Thanks Ben! I Luv snow on the red rocks!

Yes and it is snowing now at my place! Well done and FAVORITE

Such beautiful framing, Tom, and gorgeous scenery!!! Love the snow and the fabulous sky!!!! :)))vf

Thanks Laurie, always nice to hear from you!

Inspiring, Congrats on your sale!

Love the snow and the contrast of the red mountains peeking thru in the background. Very nice! v

A beauty of a capture, nicely composed;) v

love this snowy view against the red rock L/F

As usual nice and so nice...

Thanks Jon on your kind words!!

Thanks so much for the time and Love! This has been my best selling Christmas card for the past 3 years.

This would make a very beautiful and unique Christmas card, as well as looking great on a wall. I'm viewing and voting on a lot of your great artistic photos.

Thanks Donna, Kathy, and Xueling for your kind words, and special thanks to the mystery buyer. I hope someday you have the opportunity to see Sedona with Snow. Words come up empty! for describing it's Beauty!

Stunning! What a beautiful capture of the snow scene, Love it!! Congratulations on your sale! Thanks for sharing your work here!! Happy Holidays!!

Wow what great framing on this beautiful image, congratulations on your sale

Beautiful... I can feel the chill, breathe the fresh air. Wonderful shot, Tom, and congratulations of your sale :)