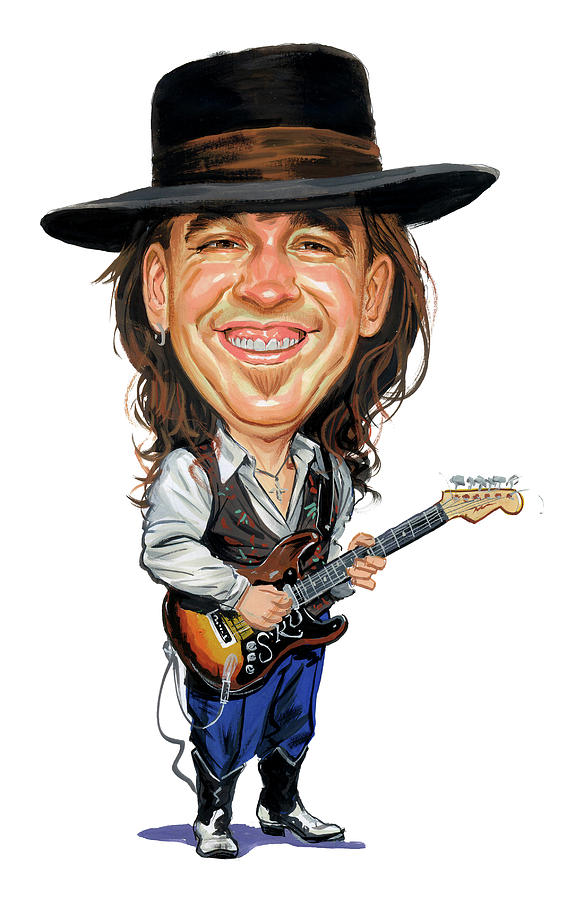 Stevie Ray Vaughan is a painting by Art which was uploaded on January 25th, 2011.

Stephen Ray "Stevie" Vaughan (October 3, 1954 - August 27, 1990) was an American guitarist, singer-songwriter, and recording artist. Often referred to by his initials, SRV, he is best known as the leader of the blues rock band Double Trouble, with whom he recorded four studio albums. Influenced by guitarists of various genres, Vaughan emphasized intensity and emotion in his guitar playing, and favored vintage guitars and amplifiers. He became the leading musician of the blues rock sound, and encompassed multiple styles, including jazz and ballads. Born and raised in Dallas as the younger brother of Jimmie Vaughan, he moved to Austin at the age of 17, and became involved with the Austin live music scene; he formed a band, Triple Threat Revue, that evolved into Double Trouble in 1978. Accompanied by drummer Chris Layton, bassist Tommy Shannon, and later, keyboardist Reese Wynans, Vaughan became an important figure in Texas blues, a loud, swing-driven fusion of blues and rock. Double Trouble's debut Epic album, Texas Flood (1983), was a breakthrough success, though he entered a long period of alcohol and drug addiction. In 1986, he successfully completed rehabilitation and ultimately released In Step (1989). On August 27, 1990, while departing a concert venue by helicopter in East Troy, Wisconsin, Vaughan was killed when the helicopter crashed into the side of a ski hill. His death triggered a global outpouring of grief, and as many as 3,000 people reportedly attended his public memorial service in Dallas. Vaughan has received critical recognition for his guitar playing, ranked at #7 on Rolling Stone's list of "100 Greatest Guitarists" in 2003. He ranked #3 on Classic Rock magazine's list of "100 Wildest Guitar Heroes" in 2007. Vaughan won six Grammy Awards, including Best Contemporary Blues Performance for In Step. Vaughan was posthumously inducted into the Blues Hall of Fame in 2000 and won five W.C. Handy Awards. As of 2012, Vaughan has sold over 11.5 million albums with Double Trouble. Source: Wikipedia.org

You have some SERIOUS talent! Way to go, Art!

Congratulations on your new sale and Happy Holidays!

You're work is awesome! I love the Nirvana... Zappa is great as well. Congratulations on your sale, you deserve it. Cheers!

Cool! Love it. Congrats on your sale!