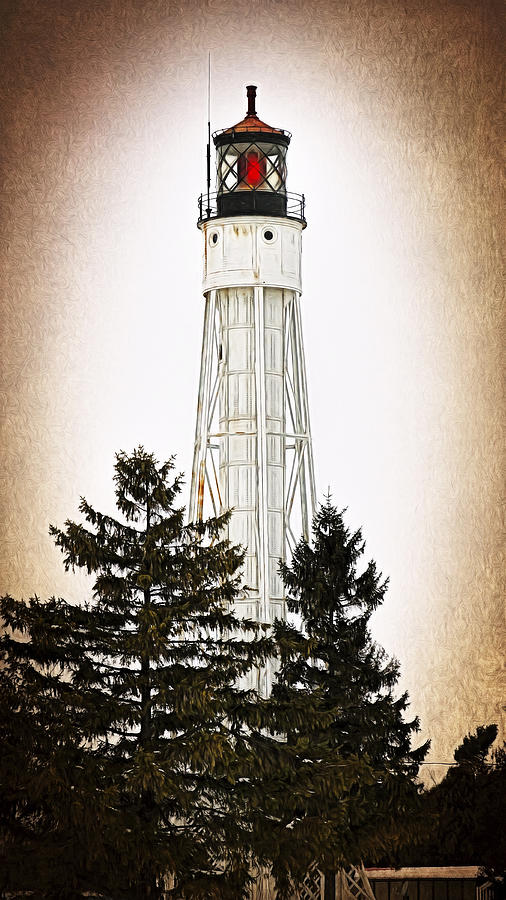 Sturgeon Bay Ship Canal Lighthouse IIi is a photograph by Joan Carroll which was uploaded on January 11th, 2015.

What I remember about this day visiting the Sturgeon Bay Ship Canal Lighthouse in Sturgeon Bay WI was the cold and blowing snow. It was just what I... more

What I remember about this day visiting the Sturgeon Bay Ship Canal Lighthouse in Sturgeon Bay WI was the cold and blowing snow. It was just what I had wanted! Traveling from Texas to visit Wisconsin's lighthouses in winter, I wanted pure white puffy snow. However, I didn't want it to arrive until after my flight landed. I got that wish. It started snowing during my drive from Milwaukee to Sturgeon Bay in Door County and a wonderful storm then set in. It was just enough to provide the snowy backdrop to my lighthouse pictures, but not so much that I was scared to drive! At Sturgeon Bay, there are two lighthouses within a few hundred yards from one another. This lighhouse on the shore, while the Sturgeon Bay Pierhead Lighthouse sits, as its name suggests, at the end of a pier. The pierhead lighthouse was constructed in 1881 but was deemed inadequate. In 1890, it was recommended that a lighthouse be built onshore near the keeper's dwelling and it was officially completed in 1898. These lighthouses serve to mark the shipping canal connecting Sturgeon Bay on Green Bay with lake Michigan, across Door Peninsula. This Canal Station remains staffed by the Coast Guard to the present day. It was listed in the national Register of Historic Places in 1984. In rereading my information on this lighthouse, I read that the Sturgeon Bay Pierhead Lighthouse (the OTHER lighthouse at this location) had been auctioned off from the USGS on September 12,2014. It felt like a stab in the heart. While it is hoped that this will help preserve the magnificent structure, it is a sad reminder that time marches on and these wonderful reminders of the past are no longer needed.

Nice capture, and I love the texture in your treatment.

Congratulations on your outstanding artwork! It has been chosen to be FEATURED in the group “500 VIEWS.