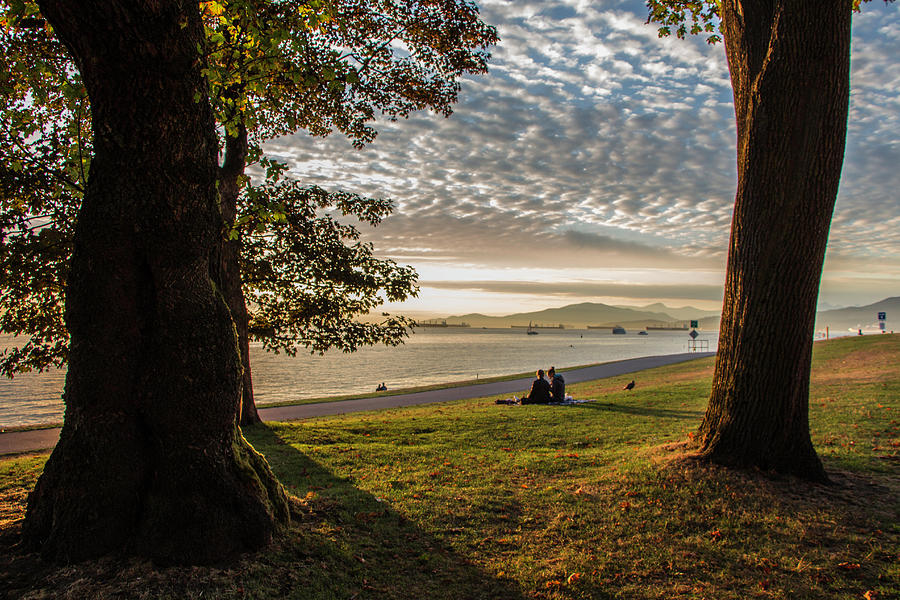 Sunset in English Bay, Vancouver, Canada is a photograph by Venetia Featherstone-Witty which was uploaded on July 25th, 2020.

A beautiful sunset on the banks of English Bay in Vancouver, Canada. English Bay Beach, near the city's West End residential neighbourhood, is the... more

A beautiful sunset on the banks of English Bay in Vancouver, Canada. English Bay Beach, near the city's West End residential neighbourhood, is the most popular sunbathing, swimming, and sunset-watching beach in the downtown Vancouver area.
In the late 19th and early 20th centuries, English Bay Beach was home to Vancouver's first official lifeguard, the legendary Joe Fortes, who taught hundreds of the city's early residents how to swim, and patrolled the beach from his cabin on its shore. Today, the waters of the bay are often dotted with hundreds of small pleasure boats, as well as huge freighters waiting at anchor to load cargoes at Vancouver's port. English Bay Beach is host to a number of public events. The Celebration of Light is a fireworks competition that is held for two weeks every summer.

The beach was the site of an oil spill in Vancouver on April 8, 2015. The official cause of the spill has not been confirmed, but at least 2700 litres of "bunker fuel" are known to have escaped from a cargo ship into the bay. The highly toxic oil later washed up on nearby beaches, creating a slick 15–20 cm thick. At least twenty seabirds were injured or affected by the spill, but the full extent of any environmental and economic damage is unknown at this early stage.The federal government was criticized for its response to the spill, including the delay in notifying the public of the health hazard, by the mayor and premier, environmental scientists, and an international shipping expert.Coast Guard officials defended the response, with regional director Assistant Commissioner Roger Girouard saying, "it was exceptional".

The beaches were tested and most were reopened following a ten-day closure. While the water and soil at most of the beaches tested was found not to have harmful levels of oil present, the government cautioned that "small amounts" of oil may remain, and urged people to be aware of the possible hazard and avoid contact with any oil.
FEATURED 7/25/20 in "Canada"
FEATURED 7/28/20 in "Travel Art"
FEATURED 7/29/20 in "Images That Excite You"
FEATURED 7/30/20 in "First Friday Gallery"
FEATURED 7/31/20 in "Your Very Best Photography"
FEATURED 8/1/20 in "Bedroom Art Gallery"
FEATURED 8/2/20 in "New FAA Uploads"
FEATURED 8/3/20 in No Place Like Home"
FEATURED 8/7/20 in "Out of the Ordinary"

Thank you very much Basant for your kind and informative critique!

Stated beautifully like a form of prose. It defines the "why" of stopping to pause, breathe the air and smile while capturing it. Thank you.

Thank you very much Robert for your eloquent critique! Thank you for adding me to your watchlist!

Thank you very much Jurgen!

Thank you very much for the feature, Bob!

Thank you very much Andrew!

Congratulations on your feature in the Fine Art America Group "Images That Excite You!" Sharing on Twitter!

Thank you very much for the feature, John and the Tweet!