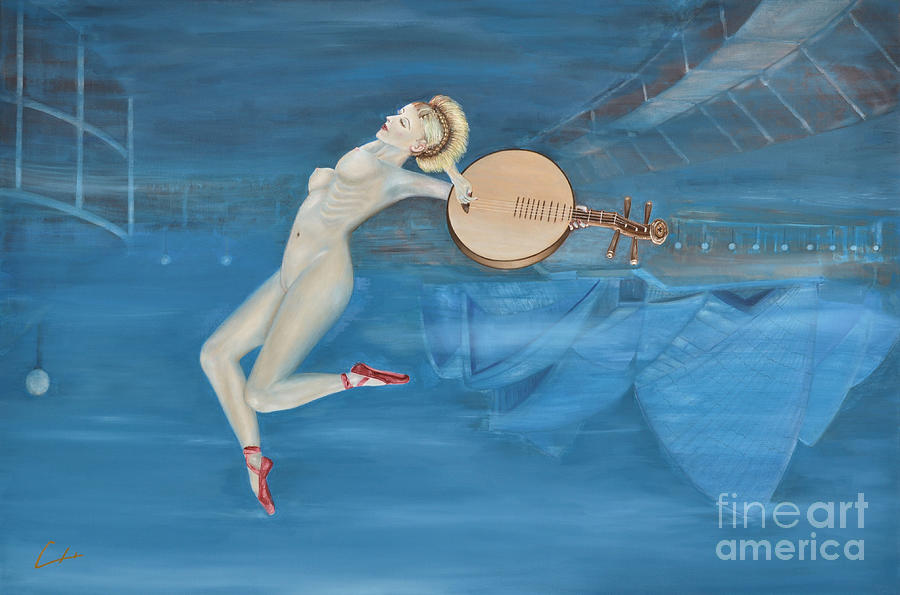 Sydney Opera House And Yueqin Op. 8 is a painting by CH Narrationism which was uploaded on October 3rd, 2015.

Scientists warn if all the globe's ice on land has melted and drained into the sea, would raise and create new shorelines for the continents and... more

Scientists warn if all the globe's ice on land has melted and drained into the sea, would raise and create new shorelines for the continents and inland seas. Therefore, the world's climate warming is a pressing issue facing mankind to work together. Music is always a good human companion. Especially in the face of fear, it helps us to be optimistic... In addition, if we do not know a five-thousand-year history of traditional Chinese Musical Instruments, then we understand that human music is not comprehensive.

From a "water and non-water" virtual side (like underwater and land), writer & painter tried to use the mini-novel oil painting way of Postmodern-Narrationism to interpret the association of humans and nature in this series, and traditional Chinese Musical Instruments as "props" linked them together... In order to achieve dramatic results, the painter innovated some "props" for the "Error-Playing" and "Mixed-Playing". Such as the Anti-traditional playing of Gehu and Zheng. Also for instance: The Chinese and Western musical instruments ensemble of Pipa with Violin Bow and Kuaiban (Allegro) with Piano. Someday, let real musicians try these strange sounds, maybe not bad.

This work is a part of the Mini-Novel Oil Paintings: IF ALL THE ICE MELTED of A CH Painting Book (www.amazon.com/gp/product/1320342787):

Antarctica and the Arctic, and almost all of the earth's last great glaciers were melting.

Squally showers sprang, mountains collapsed and the earth cracked up. Giant waves surged into broken dikes, swallowed the mountains and cities and villages. Suddenly, the whole earth was like a soaked water polo.

The Great Wall and the Berlin Wall were flooded, the Louvre was watered, the Sydney Opera House and the Colosseum were in the ocean, the street of London was a trauma and aqua city, and Hollywood slept on the seabed.

Naturist musicians were still trying to finish the last song of humanity...

(The story is purely fictional.)