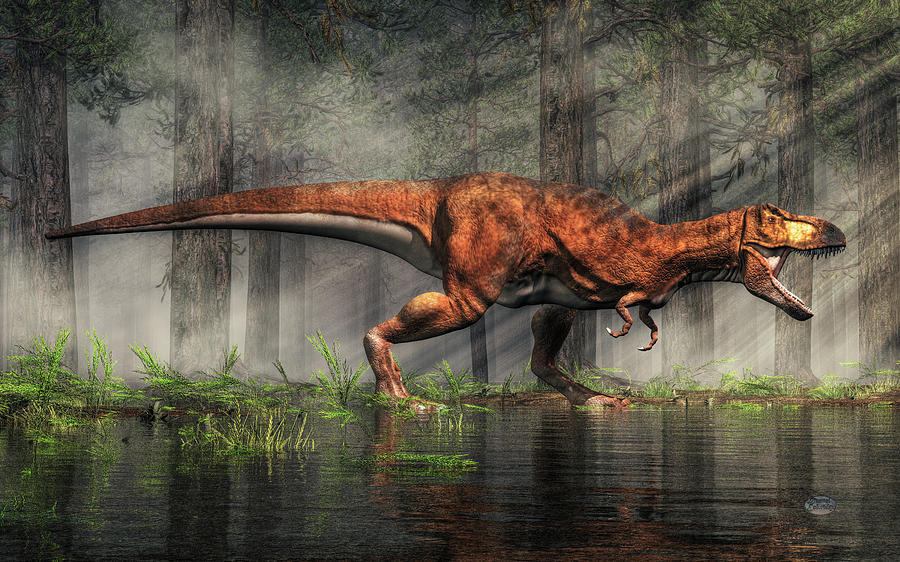 T-Rex is a piece of digital artwork by Daniel Eskridge which was uploaded on March 19th, 2015.

A tyrannosaurus rex slogs through a flooded forest. A bit of sunlight has broken through the tree canopy and shines down on the great prehistoric carnivore. His orange-brown scaly skin stands in stark contrast to the shadowy forest and dark waters at his feet. He opens his tooth filled mouth as if ready to seize something in his powerful jaws. Perhaps the flood waters have driven some prey out of hiding.

It's been about eight months since my last tyrannosaur themed work and I felt it was time for a new one. For this one, I wanted to give him a rather bright scaly skin that stood out well in a darker composition. A lot of paleoartists are giving the t-rex feathers these days, but I decided to stick with a scaly integument for a couple of reasons. For one, the only skin impression ever found for a TRex, "Wyrex" found in 2002, had no indication of feathers, and, even though they weren't much, they were on portions of the body where the species Yutrannus did have feathers indicating a clear difference from that cousin. So, I went with the current evidence - no feathers. Secondly, I think the featherless look just makes the t-rex just look more menacing, which for me, makes for more expressive art, and I generally favor artistic expression over technical accuracy.

I created this image using digital art techniques. The dinosaur was posed in Poser, then re-textured in ZBrush (where I also rescupted a bit), then exported to Vue where the rest of the scene was made. I used Vue to do the rendering, then GIMP and Photomatix to enhance the colors an add effects.

Thanks for looking,
Daniel Eskridge

Congratulations on your sale Daniel, wonderful!!

Thanks for the feature, Mariola!

daniel I love these works they are creative and bring out the "childlike imagination of wonder" in a person....l/f/t/fb

So lush and organic...perfectly matched to the subject and so well done.Don't understand how you do this but keep 'em coming.

Wow! That is one fierce looking dino!

Daniel, your Paleoart is stunningly beautiful.....it is so life like I can feel this guy breathing down my neck...awesome job and a pure gold medal winner....L/V