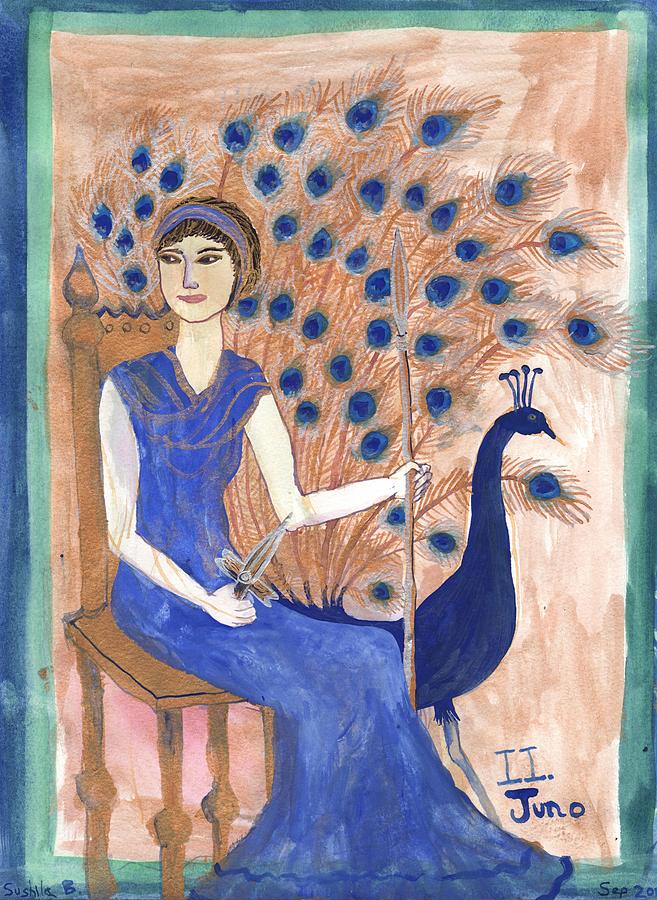 Tarot 2 Juno is a painting by Sushila Burgess which was uploaded on September 15th, 2013.

Tarot card II, best known by the name The High Priestess in the Rider-Waite deck; but when I started painting this series I was intending to base my... more

Tarot card II, best known by the name The High Priestess in the Rider-Waite deck; but when I started painting this series I was intending to base my artwork on one of the medieval decks. In the Marseilles desk, this card is called 'La Papesse' or 'the female pope', which did not greatly appeal to me. However, the Tarot of Besançon has Juno with her peacock instead. And Besançon to me is a special place, as it was where I first set foot on foreign soil, when I went to work for the summer holidays as an au pair for a French family at the age of seventeen. So it seemed right to pick the Besançon variation. Having done a little more checking out of the mythological figure of Juno, I find that she was the goddess of women and marriage, but also was portrayed as a warlike protector of the city of Rome, like a fierce mother tigress defending her cubs. Wikipedia says that she was often portrayed seated, with a peacock, armed and wearing a goatskin cloak. Alas the goatskin cloak was a cloak too far for me though, and I have settled for just a sort of semi-classical looking blue ballgown, a dagger and a spear.

The whole deck is available in two different ways:
* Professionally printed and shipping from the USA at $28.99 from www.thegamecrafter.com - search the Game Crafter site for Fiery Wands Tarot or Sushila Burgess.
* Hand-made one-off collectors' items from my shop on etsy.com - search etsy.com for Fiery Wands Tarot or Sushila Burgess. The hand-made deck comes in two different sizes, smaller about $45 and larger about $60 USD, shipping from Britain.
Both the professionally-printed and the hand-made decks consist of 78 cards in glorious full colour, with a symmetrical design on the back which keeps the secret of whether the card is upright or reversed. These decks are suitable for use in divination, and the small hand-made cards in particular fit comfortably into the reader's hand for shuffling.