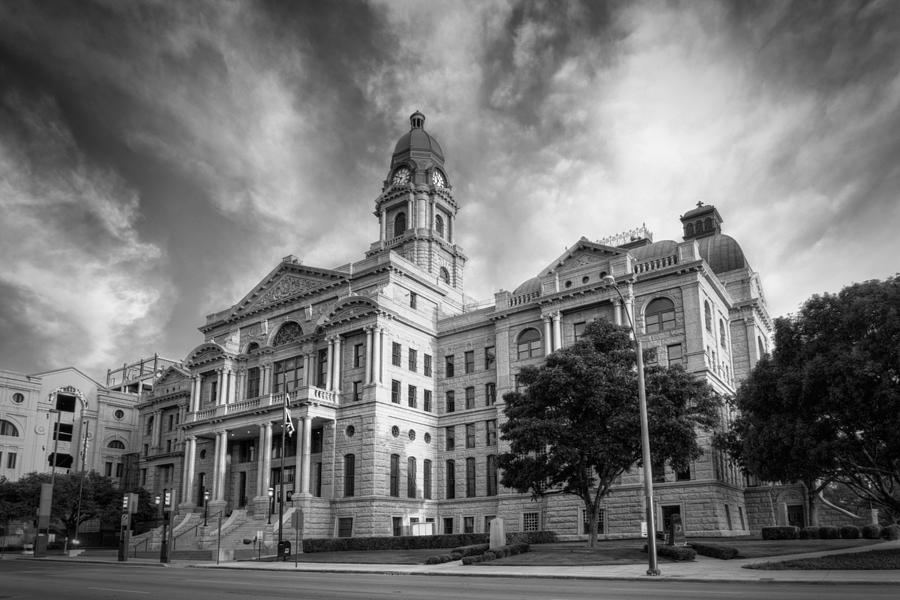 Tarrant County Courthouse BW is a photograph by Joan Carroll which was uploaded on June 9th, 2013.

I liked this shot so much I did it in color and in black and white. It is an early morning shot where the streets are empty, perfect of photographing... more

I liked this shot so much I did it in color and in black and white. It is an early morning shot where the streets are empty, perfect of photographing our wonderful county courthouse in Fort Worth TX. The Tarrant County Courthouse is one of the architectural masterpieces of Fort Worth, Texas. It sits at the head of Main Street, visible for the entire length of the street, and it sits high on the bluff of the Trinity River. It was designed by Gunn and Curtiss Architects of Kansas City and it is a striking example of American Beaux Arts Design. It was modeled after the Texas Capitol Building in Austin and uses pink granite. It was one of the first structural steel framed buildings built in the Southwestern United States. The courthouse is 194 feet in height. Over the years, many bad remodel jobs were done, including adding mezzanines, covering up the rotunda in the center, painting the copper dome, outlining the dome in neon, and adding the Civil Courts Building on the west side. The exterior of the building was used in the filming of the CBS television series Walker, Texas Ranger (April 1993-May 2001).

Congratulations on your latest sale Joan! :)

thank you Marlin and laura!