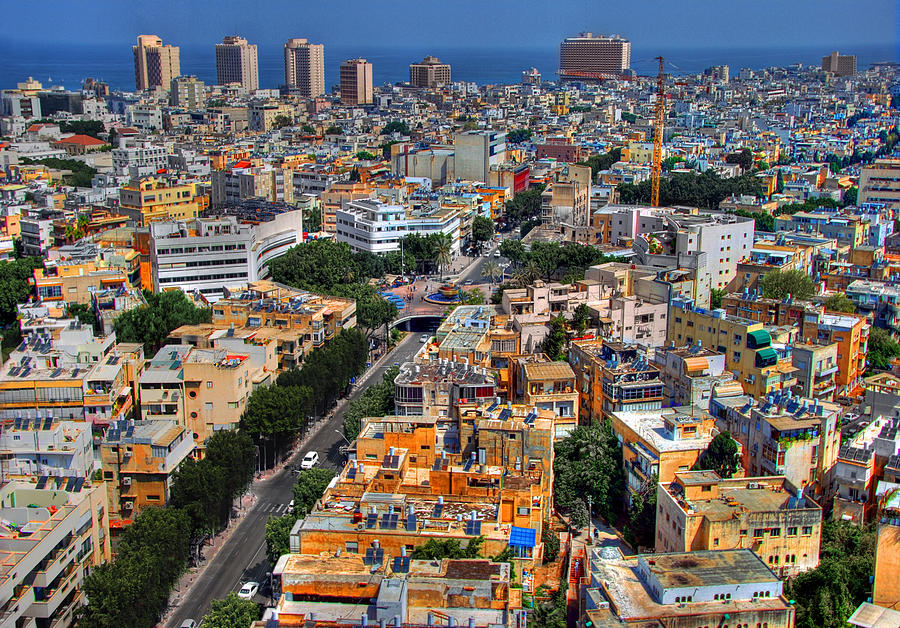 Tel Aviv Eagle Eye View is a photograph by Ron Shoshani which was uploaded on December 2nd, 2012.

An eagle view over Dizengoff circle and on the hotel line at the Tel Aviv promenade facing the Mediterranean sea.... more

an eagle view over Dizengoff circle and on the hotel line at the Tel Aviv promenade facing the Mediterranean sea.

Situated on a 12 kilometer long strip on the Mediterranean seacoast, the sunny beachfront of Tel Aviv has bathing beaches and a romantic waterfront promenade.

Tel Aviv is the cultural and business hub of Israel and is an active city with lively entertainment, culture, art, fashion events, movie theaters, shopping malls, food festivals, a variety of cuisines and an attractive nightlife scene.

The city has several plazas, the best known being Rabin Square, HaMedina Square, and Dizengoff Circle.

Tel Aviv is actually a statup by itself: on April 11, 1909, sixty six Jewish families who resided in Jaffa gathered on the sand dunes north of Jaffa for the purpose of establishing a new Hebrew town. They started a new neighborhood outside Jaffa called Ahuzat Bait, of what would later become the city of Tel Aviv. This event was is considered as the official foundation of Tel Aviv.