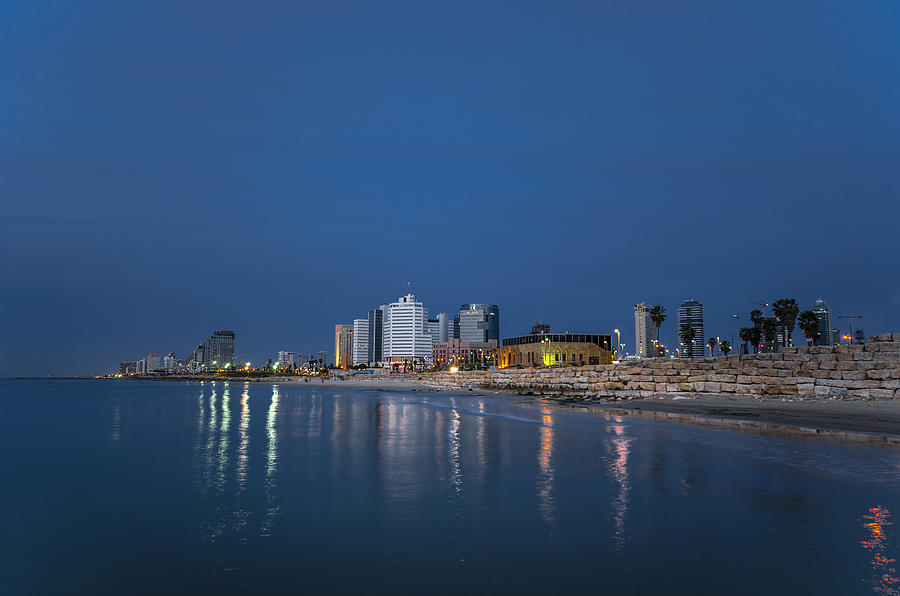 Tel Aviv the blue hour is a photograph by Ron Shoshani which was uploaded on November 27th, 2012.

I was walking on a tranquil Saturdays afternoon at the shore line of Tel Aviv, and took this photo of the fantastic Tel Aviv city lights.... more

i was walking on a tranquil Saturdays afternoon at the shore line of Tel Aviv, and took this photo of the fantastic Tel Aviv city lights.

It was a wonderful blue hour and the Mediterranean sea was super relaxed, flat with no waves at all and the city lights were glowing and hypnotizing.

In this point exactly, where this photo is taken, a magic happened: on April 11, 1909, sixty six Jewish families who resided in Jaffa gathered on the sand dunes north of Jaffa for the purpose of establishing a new Hebrew town. As the families could not decide how to allocate the new land, they held a lottery by tossing sea shells between the participants to ensure a fair division.

They started a new neighborhood outside Jaffa called Ahuzat Bait, of what would later become the city of Tel Aviv. This event was even documented in photos and considered as the official foundation of Tel Aviv.

With leafy boulevards filled with people at all hours, a thriving business sector, countless charming cafes and restaurants, a beautiful beachfront and rich cultural offerings, 100 years later, the vision of the city�s founders has come alive.

isn�t this a miracle ?

I love this twilight type of seascape.

The depth of richness in these blues--sea & sky-- are a tribute to you, Ron. f/v

The night lights of Tel Aviv are lovely. v/f