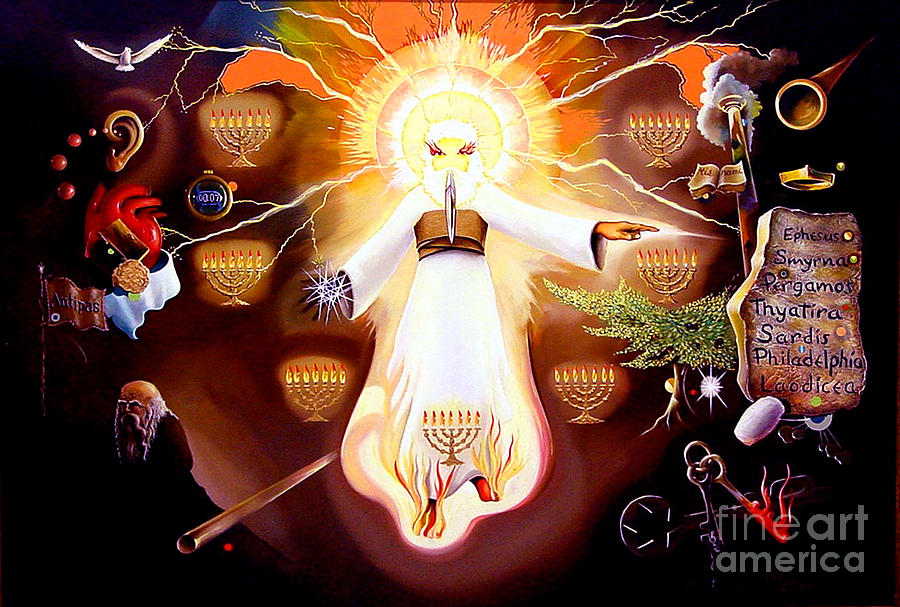 The Alpha And Omega is a painting by Peter Olsen which was uploaded on April 18th, 2012.

The Alpha And Omega

The Alpha and Omega was one of the earliest pieces I did. It is based on the narrative of Revelation 1, verses 10 - 20. St. John, exiled to the... more

The Alpha And Omega

The Alpha and Omega was one of the earliest pieces I did. It is based on the narrative of Revelation 1, verses 10 - 20. St. John, exiled to the Isle of Patmos (a tiny island off of Greece is writing about his vision. The text is

"I was in the Spirit on the Lord's day, and heard behind me a great voice, as of a trumpet, Saying, I am Alpha and Omega, the first and the last: and, What thou seest, write in a book, and send it unto the seven churches which are in Asia; unto Ephesus, and unto Smyrna, and unto Pergamos, and unto Thyatira, and unto Sardis, and unto Philadelphia, and unto Laodicea.

And I turned to see the voice that spake with me. And being turned, I saw seven golden candlesticks; And in the midst of the seven candlesticks one like unto the Son of man, clothed with a garment down to the foot, and girt about the paps with a golden girdle. His head and his hairs were white like wool, as white as snow; and his eyes were as a flame of fire; And his feet like unto fine brass, as if they burned in a furnace; and his voice as the sound of many waters.

And he had in his right hand seven stars: and out of his mouth went a sharp twoedged sword: and his countenance was as the sun shineth in his strength.
And when I saw him, I fell at his feet as dead. And he laid his right hand upon me, saying unto me, Fear not; I am the first and the last: I am he that liveth, and was dead; and, behold, I am alive for evermore, Amen; and have the keys of hell and of death.