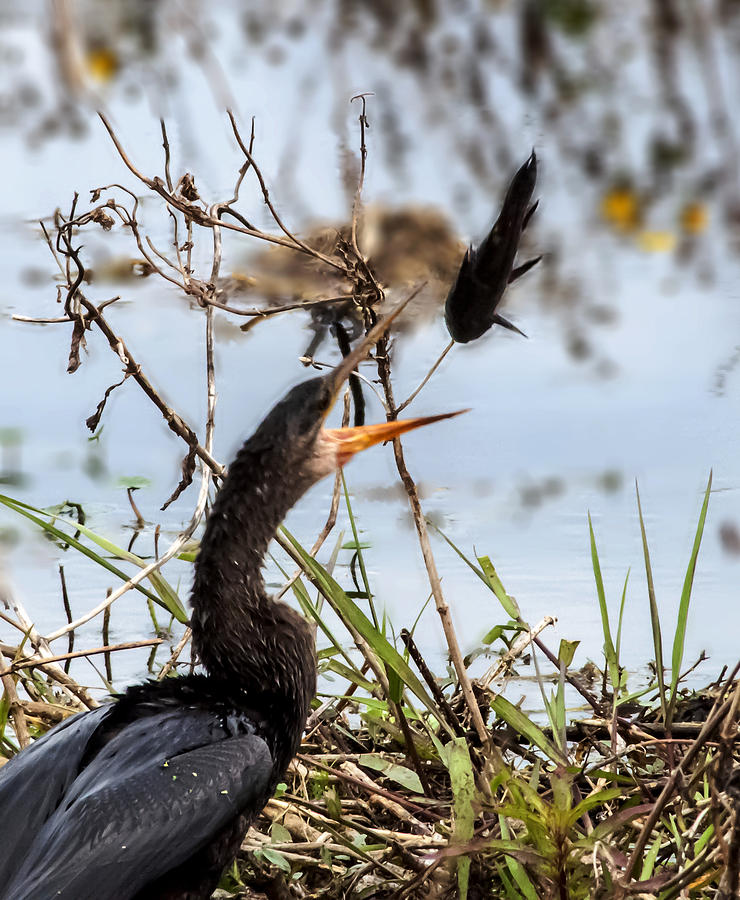 The Art of Juggling is a photograph by Norman Johnson which was uploaded on February 22nd, 2015.

The Art of Juggling

An anhinga or snake bird tries to swallow a fish it caught in a swampy area of the Circle B Bar Preserve in Lakeland, Florida. It had a real hard... more

The Art of Juggling

An anhinga or snake bird tries to swallow a fish it caught in a swampy area of the Circle B Bar Preserve in Lakeland, Florida. It had a real hard time getting it off its beak after it had speared it. The first time it got it off its beak it fell back into the water and it had to retrieve it. Then it spent probably another five minutes before it got it off its beak for good and was able to swallow it. The anhinga or American darter�(anhinga anhinga) can be found throughout the Americas from the southeastern United States to Argentina. Because it lacks the oils and types of feathers used to keep birds warm, they are restricted to the warmer climes. It is also called the black darter, water turkey, or snakebird. For other names refer to the Cornell Lab of Ornithology site.

The word anhinga comes from the Brazilian Tupi language, which means devil bird, an evil spirit of the woods.�The anhingas or darters, and cormorants are all part of the order suliformes. They were once part of the same family but have been separated into two families, anhingidae and phalacrocoracidae respectively.

Anhingas are large waterbirds 29" to 37" in length with a wingspan of up to 43". They have slender bodies, thin necks,�thin pointed beaks, �and a long fan-like tail. Their feet are webbed. The males are black with a green iridescence, silvery white wing patches, and white spots on its wings and back. Females have a pale brown or beige neck and breast and�juveniles are brownish.

I'm glad you like it Scott. Thank you very much for the feature in the group "FAA Portraits - Birds."

Wow. I love the movement.

thank you very much Skip.

Thank you very much Marvin.

Thank you very much Rosalie.

What a capture! Brilliant timing LF

Thank you very much LemonArt.

Thank you very much Jeff.