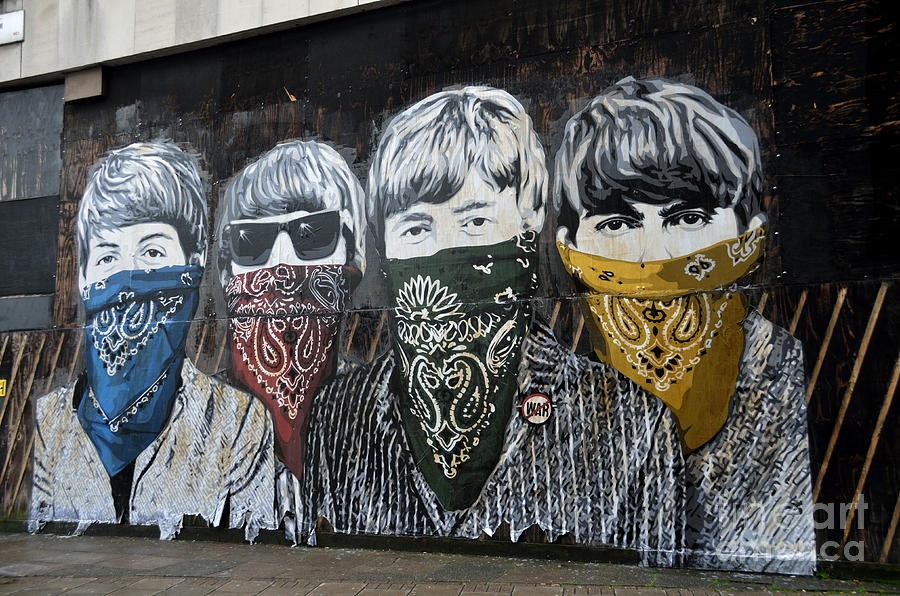 The Beatles wearing face masks street mural is a photograph by RicardMN Photography which was uploaded on April 13th, 2014.

Mr. Brainwash (often written MBW) is a name used by French-born, Los Angeles-based street artist Thierry Guetta. According to the 2010 Banksy-directed film Exit Through the Gift Shop, Guetta was a proprietor of a used clothing store, where he began as a security guard, and amateur videographer who was first introduced to street art by his cousin, the street artist Invader, and who filmed street artists through the 2000s and became an artist in his own right in a matter of weeks after an off-hand suggestion from Banksy.

A number of critics have observed that his works strongly emulate the styles and concepts of Banksy, and have speculated that Guetta is an elaborate prank staged by Banksy, who may have created the works himself. Banksy insists on his official website, however, that Exit Through the Gift Shop is authentic and that Guetta is not part of a prank.

In 2009, Madonna paid Guetta to design the cover art for her Celebration album.

Your beautiful artwork has been featured in the "Travel Art" gallery at Fine Art America! L&F. For further promotion, you can post it to the specific Travel Destinations galleries, our Facebook group and our Pinterest board - All the links are provided on our group's homepage.

Wonderful! Congratulations on your sale!

RichardMN, Congrats on your sale

RichardMN, Congrats on your sale