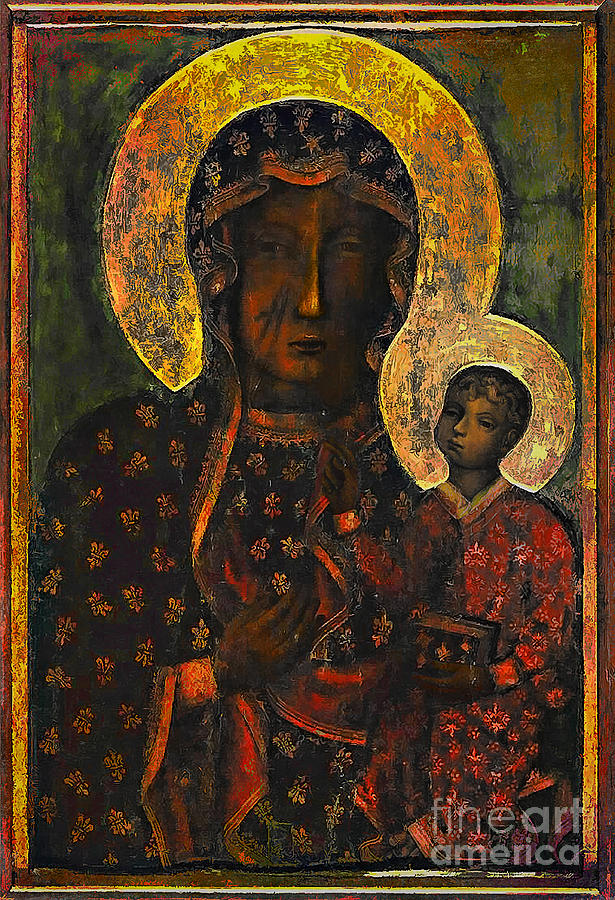 The Black Madonna is a painting by Andrzej Szczerski which was uploaded on September 18th, 2012.

The National Shrine of Our Lady of Czestochowa (or simply Czestochowa), known also as the American Czestochowa is a Polish-American Roman Catholic shrine near Doylestown, Pennsylvania, founded in 1953.

In 1953 a Polish Pauline monk, Father Michael M. Zembrzuski, purchased a tract of land near Doylestown with the intention of building a chapel dedicated to the Black Madonna of Czestochowa at Jasna Gora, Poland's most important religious icon, to reconnect Polish-Americans with their Polish Catholic roots. A barn was converted into the first chapel; it was moved to a new site and dedicated on June 26, 1955.
The chapel was reorganized as a shrine to celebrate the thousandth anniversary of the Polish nation in 1966. It was dedicated on October 16, 1966 by Archbishop (later Cardinal) John Krol and President Lyndon B. Johnson. The centerpiece of the new shrine was a church building designed by the Polish-American architect George Szeptycki housing the replica of the Black Madonna painting.

Since 1987, around the second week in August, there is an annual walking pilgrimage to the shrine from Sts Peter and Paul Church in Great Meadows, New Jersey crossing the border into Pennsylvania and going to the shrine at Doylestown, akin to the walk to Czestochowa from other parts of Poland. There are three groups that walk in the pilgrimage, a Polish group, a Polish youth group, and an American group, with a Spanish group sometimes joining the American group. Usually, about 2,000 pilgrims take part.

Congratulations on your artwork and sale!

🏆 Congrats on your Sale

Please be sure to enter this into the monthly Features contest once submissions begin.

CONGRATULATIONS!! Your beautiful artwork has been Featured by the - CATHOLIC ART GALLERY - Artist Group on Fine Art America / PIXELS! Thank you for sharing it !! http://tinyurl.com/CatholicArtGallery

Beautiful and meaningful work, Andrzej. I invite you to share this with Catholic Art Gallery - Artist Group on Fine Art America / Pixels. I'll be looking for it.