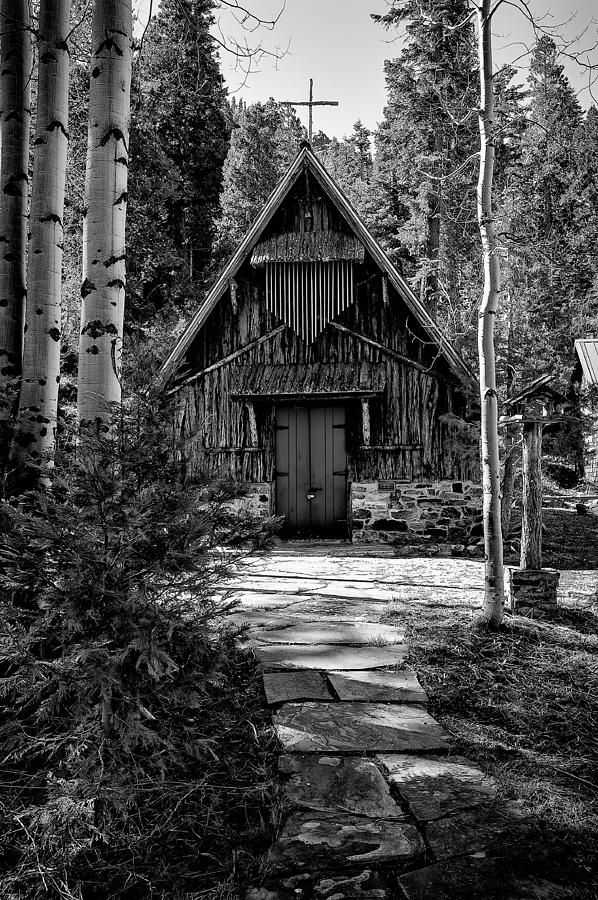 The Church is a photograph by Dennis Bolton which was uploaded on March 27th, 2015.

The following was printed in the July 1973 Lake Tahoe Historical Society newsletter.

I doubt that I’ll ever forget the overwhelming feeling of awe and inspiration that was mine to experience this morning.

The moment I stepped from the car, I was immediately caught up in the beauty and serenity of the surroundings – towering pines, colorful wildflowers, lush ferns, chirping birds, and melodic chimes heralding the commencement of the 10 a.m. service at Fallen Leaf Lake’s quaint little Chapel of St. Francis of the Mountains.

Today’s service, however was not designed for the campers, the tourists, and the townsfolk who would normally flock to the chapel to receive a bit of God ‘midst the great outdoors. Rather, it was a service conducted especially for the “Friends of Fallen Leaf” in observance of the chapel’s 50th Anniversary.

It was back on the fist Sunday of July, in 1923, that the picturesque chapel first opened its doors. And today, as with every 10 a.m. service on Sundays past, the chapel’s wooden benches were filled to capacity, both indoors as well as outdoors neath the shading canopy.

Invitations to some 125 persons had been sent out back in mid-June, in the form of postal cards with the rustic chapel pictured on the front of each card. On the reverse side was a hand-written note inviting the Friends o Fallen Leaf to the brunch and social hour which would be held outdoors following the historic service.

As the congregation began singing the opening hymn, “America,” I felt that surely this must have been the only hymn ever used to open each service with. Somehow the words … “I love thy rocks and rills, thy woods and templed hills, my heart with rapture thrills, like that above” … just seemed to so beautifully blend in with the surroundings, and render a deeper meaning to the service.

Charm and tradition were present everywhere I looked … most particularly in the freshly-picked bouquet of wildflowers that decorated the altar and the window boxes. These flowers were just one more little nicety that the W.W. Price’s [of Stanford University who first began to develop the resource of Fallen Leaf Lake back I n 1896], and their daughter, the late Harriet Price Craven, insisted be a part of every service.

Officiating at the historic service was Bishop Edward McNair, a longtime friend of Harriet Price Craven who had not only worked with her in the chapel, but had headed the chapel program for many years.

Bishop McNair told his audience that he would share as much of Fallen Leaf Lakes’ history with us as he possibly could.

He took us back to the year 1896 when, under Mr. Price’s tutelage, Fallen Leaf was first developed as a camp for boys. Camp Agassiz was located at a spot one-half mile below Glen Alpine. By 1906 the area had become so popular that Price began the development of Fallen Leaf Lodge.

Fallen Leaf Lodge has remained in the Price family since its inception, and is today operated by Bill Craven [Harriet Price Craven’s only child] and his wife, Barbara. The Price’s devotion to the tenet that the beauty of Fallen Leaf lies in its natural surroundings is exemplified by the area’s complete lack of commercialism.

Back to 1902, it was the Prices’ dream to have a little chapel at Fallen Leaf. For several years, services were held outdoors in the woods, and around the campfire at the lodge. The addition of a den to the lodge in 1919 made it possible for this to be the first building used for services. But economics simply made it impossible to begin construction of a chapel until more funds were generated.

The sale of Mrs. Price’s booklet, “Legends of Tahoe,” greatly helped, but, according to Bishop McNair, money for the chapel was coming in so slowly that other methods of fund raising were needed. It was then that Horace B. Clifton and L.P. Lattimer wrote and illustrated the lovely poetic plaque that still hangs on the outside of the chapel, to the right of the front door.

In the year 1921, Price was finally able to begin building his dream chapel. Two years later, the chapel was completed. And, on the first Sunday of July, in 1923, it was dedicated in living memory to Dr. Price.

In September of 1924, the first christening was conducted in the chapel. In 1926, the first wedding was performed uniting Dixwell Pierce and Katherine Bradley [Mrs. Pierce is one of our Life Members, and is a member of the Gilmore family that discovered and developed Glen Alpine Springs].

Bishop McNair said that if we were to walk around the chapel, “we’d see all kinds of interesting things.”

– the cross upon the altar that was used in the temporary chapel of St. Grace Church in San Francisco after the great earthquake of 1906.

– the marble credence table was carved from the only unbroken pillar of the communion rail of the old Stanford Chapel.

– the mosaic head of Christ was a gift from Dr. Charles Gardner of Stanford University who had received it from an artist friend in Florence, Italy.

In addition, many memorials have been placed inside the chapel honoring pioneers of the area, thereby making the chapel a place of charm, inspiration, and historical significance.

Personally, I felt that the most poignant memorial were the bronze plaques that have been placed on the wall alongside the altar, in honor of Fallen Leaf’s three pioneers … W.W. Price [1871-1922], his wife Bertha DeLaguna Price [1870-1933], and their daughter Harriet Price Craven [1904-1973].

Bishop McNair concluded his ‘sermon’ by saying that “the spiritual heart of the whole of Fallen Leaf is, indeed, this Chapel of St. Francis of the Mountains.”

He added that there were three distinct groups of people at the Fallen Leaf today … the Stanford people, the old-timers who have been coming to Fallen Leaf for years, and the tourists. “So, this chapel is truly the unifying force.”

Before the closing hymn, “Faith of Our Fathers,” was to be sung, Bishop McNair announced that the 50th Anniversary Service would culminate in a most unusual historic event. “We will now conduct the ceremony of Holy Baptism for the great-grandson of the man who, 50 years ago, stood in this exact same spot and officiated at the first service held in the Chapel of St. Francis of the Mountains.”

And so, little Michael Evans Doolittle, great-grandson of the Reverend David Evans, was baptized on this, a beautifully-historic Sunday morning.