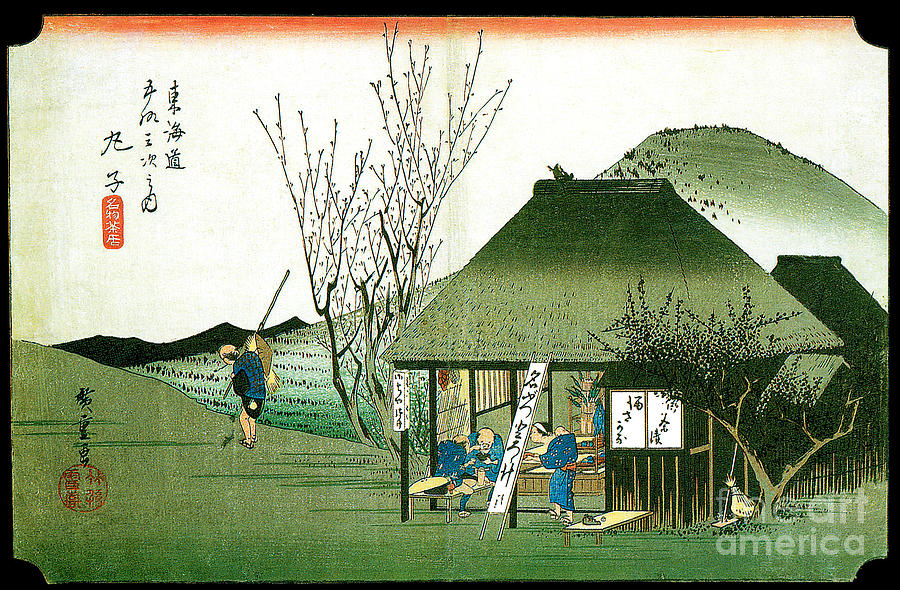 The Famous Teahouse at Mariko 1834 is a painting by Utagawa Hiroshige which was uploaded on June 27th, 2021.

The Famous Teahouse at Mariko 1834

The Famous Teahouse at Mariko 1834

The Famous Teahouse at Mariko 1834, Utagawa Hiroshige,Utagawa Hiroshige (/ˌhɪəroʊˈʃiːɡeɪ/, also US: /ˌhɪərəˈ-/; Japanese: 歌川 広重 [ɯtaɡaɰa çiɾoɕiɡe]), born Andō Hiroshige (安藤 広重; 1797 – 12 October 1858), was a Japanese ukiyo-e artist, considered the last great master of that tradition. Hiroshige is best known for his horizontal-format landscape series The Fifty-three Stations of the Tōkaidō and for his vertical-format landscape series One Hundred Famous Views of Edo. The subjects of his work were atypical of the ukiyo-e genre, whose typical focus was on beautiful women, popular actors, and other scenes of the urban pleasure districts of Japan's Edo period (1603–1868). The popular series Thirty-six Views of Mount Fuji by Hokusai was a strong influence on Hiroshige's choice of subject, though Hiroshige's approach was more poetic and ambient than Hokusai's bolder, more formal prints. Subtle use of color was essential in Hiroshige's prints, often printed with multiple impressions in the same area and with extensive use of bokashi (color gradation), both of which were rather labor-intensive techniques.
Woodblock printing in Japan (木版画, mokuhanga) is a technique best known for its use in the ukiyo-e artistic genre of single sheets, but it was also used for printing books in the same period. Widely adopted in Japan during the Edo period (1603–1868) and similar to woodcut in Western printmaking in some regards, the mokuhanga technique differs in that it uses water-based inks—as opposed to western woodcut, which typically uses oil-based inks. The Japanese water-based inks provide a wide range of vivid colors, glazes, and transparency.