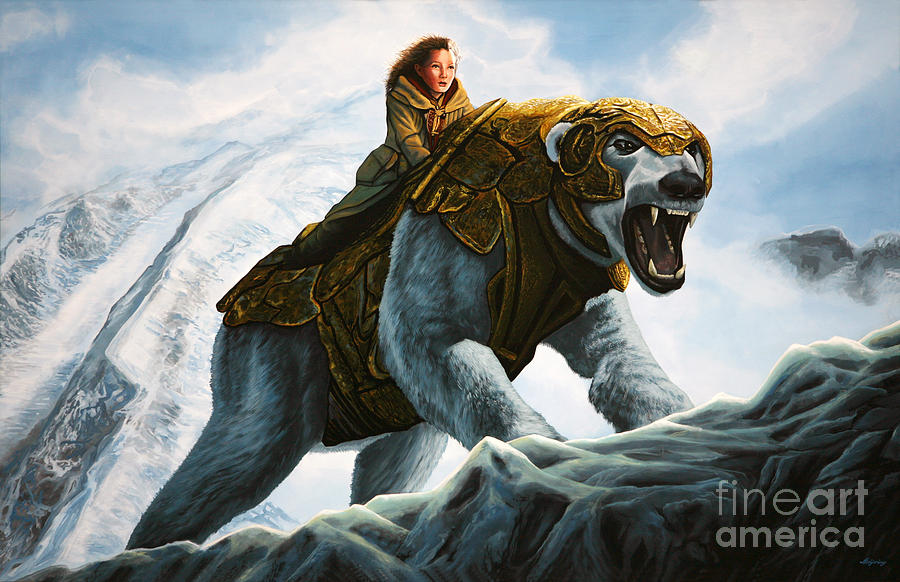 The Golden Compass is a painting by Paul Meijering which was uploaded on November 26th, 2012.

The Golden Compass - realistic acrylic painting by the Dutch fine artist Paul Meijering - the Original painting is 120 x 180 cm and for... more

The Golden Compass is a 2007 British-American fantasy-adventure film based on Northern Lights, the first novel in Philip Pullman's trilogy His Dark Materials. Written and directed by Chris Weitz, it stars Dakota Blue Richards, Daniel Craig, Eva Green, Tom Courtenay, Christopher Lee, Nicole Kidman and Sam Elliott. The project was announced in February 2002, following the success of recent adaptations of other fantasy epics, but troubles over the script and the selection of a director caused significant delays. At US$180 million, it was one of New Line Cinema's most expensive projects ever, and its middling success in the USA contributed to New Line's February 2008 restructuring.
The story depicts the adventures of Lyra Belacqua, an orphan living in a parallel universe on a world that looks much like our own. In Lyra's world, a dogmatic ruling power called the Magisterium is conspiring to end tolerance and free inquiry. Poor, orphan, and Gyptian children are disappearing at the hands of a group the children call the Gobblers. When Lyra discovers that Mrs. Coulter is running the Gobblers, she flees. Rescued by the Gyptians, Lyra joins them on a trip to the far north, to the land of the armored polar bears, in search of the missing children.
Before its release, the film received criticism from secularist organisations and fans of His Dark Materials for the dilution of the anti-religious elements from the novels, as well as from some religious organisations for the source material's anti-Catholic themes. The studio ordered significant changes late in post-production, which Weitz later called a "terrible" experience. Although the film's visual effects (which Weitz has called the film's "most successful element") won both a BAFTA and an Academy Award, critical reception was mixed.

Thank you very much, Jerome, for your compliments!;-)

Congratulation on your sale.

Thank you so much, Anthony, for your compliments and feature(s) in your marvellous group!!;-)