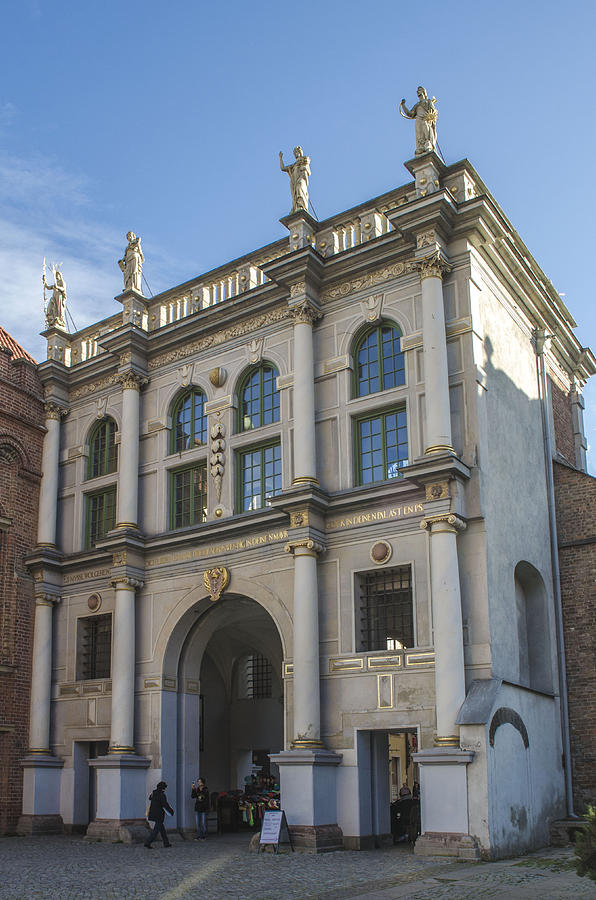 The Golden Gate in Gdansk is a photograph by Adam Budziarek which was uploaded on October 31st, 2013.

The Golden Gate in Gdansk

Golden Gate (Polish: Złota Brama, German: Langgasser Tor) in Gdańsk (Danzig), Poland, is one of the most notable tourist attractions of the... more

The Golden Gate in Gdansk

Golden Gate (Polish: Złota Brama, German: Langgasser Tor) in Gdańsk (Danzig), Poland, is one of the most notable tourist attractions of the city.
It was raised in 1612–14 in place of the 13th century gothic gate (Brama Długouliczna). It is located at one end of Long Lane (Długa street, German: Langgasse), where, together with Brama Wyżynna and Wieża Więzienna, it forms a part of the old city fortifications.
It was designed by architect Abraham van den Blocke and was constructed by Jan Strakowski. The architectural style of the gate is Dutch manierism. Next to it is the late-gothic building of the Brotherhood of St.George.
Both sides of the gate have attiques, with figures symbolising citizen's qualities. They were designed in 1648 by Jeremias Falck ("Polonus"), and reconstructed in 1878 due to the originals being damaged by time and climate.
From the West side they represent: Pax (Peace), Libertas (Freedom), Fortuna (Wealth) and Fama (Fame). From the East side (Long Lane) they are Concordia (Agreement), Iustitia (Justice), Pietas (Piety) and Prudentia (Prudency). The Latin inscription on the gates reads: Concordia res publicæ parvæ crescunt - discordia magnæ concidunt, which means "In agreement small republics grow, because of disagreement great [republics] fall".
Destroyed in World War II, it was rebuilt in 1957. The original German inscription has recently been restored: Es müsse wohl gehen denen, die dich lieben. Es müsse Friede sein inwendig in deinen Mauern und Glück in deinen Palästen (Psalm 122)